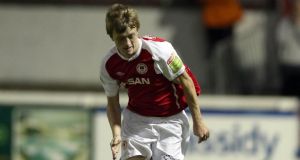 Jason Byrne had one early chance for the Seagulls but his first-time effort from 25 yards went over. St Pat’s were next to threaten but Killian Brennan’s long-range free was punched clear by Bray goalkeeper Darren Quigley.

The Inchicore men soon took control and Liam Buckley’s team deservedly had their noses in front on 25 minutes. A perfect ball from Kenny Browne found Forrester on the left who then spun past defender Eoin Hyland and deftly chipped the ball over Quigley into the roof of the net.

They could have went two clear just before the interval when a Brennan free from 35 yards was headed just wide of the far post by the industrious Browne.

Early in the second half the visitors continued to press forward and Conan Byrne had one long-range effort well saved by Quigley after striker Anto Flood had created the opening.

And they should have stretched their lead on 56 minutes when Forrester and Ian Bermingham combined to set up a chance for Greg Bolger. However, the midfielder’s effort from 14 yards took a deflection and rebounded off the upright to safety.

Bray had their chances and substitute striker Ismahil Akinade should have done better with some late opportunities.

1 Gordon D’Arcy: Change was advisable before Twickenham; now it is inescapable
2 Kevin Seaward: ‘The first time I wore the Vaporflys, I hated them’
3 Gerry Thornley: Wild reactions to this Ireland team as fickle as the wind
4 Seán Moran: Dublin and Galway make good starts in differing circumstances
5 Cheltenham keeping a watching brief on coronavirus
Real news has value SUBSCRIBE