Derby delight for Shamrock Rovers as Miele and Shaw on target

Derry and Longford both earn points despite sending offs; wins for Bohs and Harps 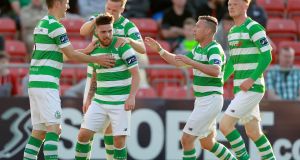 Rovers took the lead on 15 minutes when Miele finished well into the bottom corner past Brendan Clarke following a cracking Rovers move that involved Dean Clarke and Gary Shaw. Miele had an opportunity to double Rovers’ advantage on 21 minutes with a low shot from 20 yards, but Clarke saw the danger and was well placed to make the block.

Pat’s had a chance on the half hour when Christy Fagan collected a long ball on the edge of the Rovers box. He did well to shake off two Rovers defenders but then lost his footing and the ball, and the chance was gone.

Pat’s started the second half well and Fagan had another opening three minutes in when he got on the end of Ian Bermingham’s cross and turned before shooting, only to see his strike deflected away.

Pat’s Billy Dennehy was put through on goal to the right of the box on 69 minutes but Craig Hyland got enough of a touch on the ball to put it out for a corner. Dennehy took the corner himself and brother Darren got a header on target but again Hyland saved.

Rovers increased their lead on 77 minutes. On the break, Patrick Cregg was given too much space and delivered an inch-perfect low ball for Shaw to tap in past Clarke.

A solitary goal from Ismahil Akinade, scoring for the second week running, ensured Bohemians maintained their recent revival as they deservedly took the points from Ferrycarrig Park.

And had it not been for home captain and goalkeeper Graham Doyle, who made a string of impressive saves, Keith Long’s Dubliners would have won by more.

Despite a positive start from Youths which saw Chris Kenny send an overhead kick just over the bar from Craig McCabe’s long throw in the opening minutes, Bohemians dominated the first half.

Youths had little answer to the power and pace of Akinade who brought the first save of the night from Doyle on 22 minutes.

Mark Quigley then shot over the top from Dave Mulcahy’s lay off from a Kurtis Byrne corner before Bohemians deservedly took the lead, for what proved the only goal of the game, on 34 minutes.

Keith Buckley threaded Akinade in on goal and the big striker slipped the ball past the advancing Doyle for a composed finish.

Sloppy defending should have seen Bohemians further ahead right on 45 minutes.

McCabe allowed Buckley’s arced ball from the right to go in behind him for Byrne whose volley produced another fine parry save from Doyle.

Doyle was there once again in stoppage time at the end of the half to save a low drive from Quigley as Bohemians trooped off full value for their lead.

Quigley brought the best out of Doyle two minutes into the second half with a dipping volley before the overworked Youths’ goalkeeper saved at the feet of Buckley.

Derry City produced a resilient display to secure a share of the spoils at Eamonn Deacy Park.

The Candystripes played more than an hour of this contest in the west with 10 men following the dismissal of Conor McCormack, but Kenny Shiels’s side still frustrated Galway.

It ended in bitter frustration for Tommy Dunne’s team, who were left reflecting on what might have been.

With Ryan Connolly effective in the centre of the park Galway controlled the majority of the opening period, but the Tribesmen weren’t sufficiently clinical converting opportunities.

Ruairi Keating had a sixth minute attempt headed off the line by Dean Jarvis, while Stephen Folan also went close.

A splendid Connolly flick released Gary Shanahan in the 18th minute, but the Galway winger drilled wide from an acute angle.

Derry were reduced to 10 men in the 28th minute when Conor McCormack was sent off earning a second yellow card for a foul on Marc Ludden.

After the restart John Sullivan was denied twice by Gerard Doherty as parity prevailed in the west.

Finn Harps were too hot to handle for Sligo Rovers in the north-west derby at sun-kissed Finn Park.

The Donegal club, with only one league win in their previous 10 league games, halted Sligo’s great recent run which had seen the Bit O’Red pick up 15 points from a possible 18.

Harps took the lead on 16 minutes as midfielder Seán Houston burst through the visiting defence before calmly slotting the ball past the advancing Micheál Schlingermann.

Harps made it 2-0 on 47 minutes when David Scully found Ryan Curran and Houston added the third on 71 minutes after a goalkeeping error by Schlingermann.

Ten-man Longford go into the mid-season break bottom of the Premier Division despite claiming a point against fellow strugglers Bray at the Carlisle Grounds.

Wanderers ended their eight-game losing streak in all competitions as they remain ahead of their basement opponents on goal difference.

The visitors were reduced to 10 men just before the hour when right back Jamie Mulhall picked up a second booking for upending Dylan Connolly having received a first yellow after just four minutes for a foul on the same player.

Without a top-flight win since defeating Wexford on the opening day of the season back in March, Longford nearly went ahead with 14 minutes remaining.

Kevin O’Connor squared inside off the right flank for David O’Sullivan whose first-time effort from the edge of the box was superbly turned out for a corner by Peter Cherrie’s acrobatic save.

In what was potentially Harry Kenny’s last match in charge of Bray as his caretaker tenure ends during the break, the Seagulls started brightly with Irish under-21 cap Connolly curling narrowly over after nine minutes when he was put through by Ger Pender.