Cork City retain services of Sean Maguire for next season 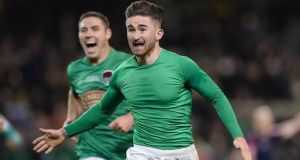 Sean Maguire will be staying with Cork City for another season after a fine 2016 campaign which saw him score the winner in the FAI Cup final. Photograph: Inpho/Tom Beary

Cork City have achieved one of their close season’s goals by agreeing a new deal with Sean Maguire, the league’s top scorer in 2016 and the man who got the club’s winner late on against Dundalk in the FAI Cup final.

The 22 year-old, who arrived at Turner’s Cross from Dundalk after a spell in England with West Ham, had been linked with a number of other clubs but says that after having been given the opportunity by John Caulfield to restore some much needed momentum to his career at City, he felt he owed the manager “another season at least”.

The aim now, he says, is to maintain his own form and help the southerners to leapfrog Dundalk at the top of the table. “It was a great season, but we want to have another crack at the league, because that is what this club deserves. I can’t wait to get started. When you are in a team that is confident, surrounded by good players, it gives you confidence and if I start well, I am sure I can have another good season.”

Caulfield is similarly upbeat about the team’s target for 2017 and clear about the Irish under-21 international’s place in that: “We are all striving to win trophies again next year and to make sure Seanie can get as many goals as possible.

“He is part of a really great group of lads and, thankfully, the majority of them are there again for next season. We hope that we can get better again in 2017 and Seanie will be a vital part of that.”

Derry City defender Aaron Barry, meanwhile, says he turned down an offer from Caulfield in order to stay at the Brandywell for at least another season.

“I’m happy to get it sorted,” he told the Derry Journal. “I was strongly considering an offer from Cork but I took my time with it. I know Kenny (Shiels) was panicking with it. It was a tough time and it took a lot of convincing from my family (but) both parties are happy with the one year deal to be honest.”

1 Georgia and Fiji in line to join Six Nations sides in eight-team tournament
2 Ken Early: Another Mourinho masterclass in going through the motions
3 Malachy Clerkin: Sleep well Jack, you made us all happy
4 All in the Game: Jack fact-cheques money story
5 The Offload: All eyes on Leinster’s academy intake
Real news has value SUBSCRIBE