Airtricity League: Clubs line up for a place in First Division 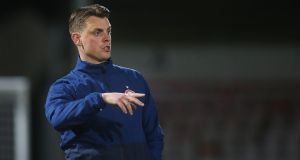 Shelbourne manager Ian Morris: desperate to see his side avoid a quick return to the second tier in Sunday’s playoff game against Longford. Photograph: Lorcan Doherty/Inpho

As Ian Morris and Daire Doyle started to prepare for a game their clubs are hoping to win so as not to be in the First Division next season, an orderly queue of clubs hoping to be there seemed to be forming on the closing date for expression of interest in joining, with four confirmed and talk persisting of other eager parties.

There were a couple of familiar faces, with St Francis announcing that they are interested in returning some 20 years after departing, while Pat O’Sullivan’s Limerick FC are understood to have formally confirmed their intention to apply after just one season away.

The absence of a league team in the city certainly suggests a vacancy, but new entity Treaty United, whose senior women’s side were knocked out of the FAI Cup at the semi-final stage by Cork City on Sunday, have also thrown their hat in the ring and would start the process as favourites.

“This is about bringing League of Ireland football back to the city,” said the club’s chairman, Conn Murray, a former chief executive of Limerick City and County Council, “and getting to the point where it can sustain itself. We believe we can give that a go, we are confident that we can try, but we are certainly not naive about the challenges involved.”

The group includes former players Dave Mahedy and Mike Aherne and has the backing of various business and other interests in the city. Like Limerick FC before it, the club would intend to play out of the Markets Fields.

Denying reports earlier in the day that they would apply, Carlow Kilkenny FC chairman Peter Harvey said the club was still a few years off being ready to take the step, but in Wexford a new group is applying for a licence in the apparent hope of taking the one currently held by Wexford FC (formerly Wexford Youths) and replacing the club at Ferrycarrig.

Reports of a second licence application from the county had been circulating for some time, but the unnamed backers of the venture, provisionally called Yola FC, have apparently told the Wexford People that they realise it will be an either/or choice for the league.

Mick Wallace, who took Wexford Youths into the league in 2007, said he was surprised by the rival application but said “anything can happen in football”.

“The idea of them replacing us and getting a foothold in Ferrycarrig seems strange to me. You don’t usually get one club actively trying to get another club out, but anyone can look to enter a club.

“Our first team struggles because we cannot afford to pay the players, but the underage teams are amazing and I would say we are stronger now than we were two or three years ago. Overall, it’s tough but we are making it work.”

Morris, meanwhile, will be desperate to see his Shelbourne avoid a quick return to the second tier in Sunday’s playoff game against Longford but accepts that he has no complaints.

“It’s tough,” he said after Monday night’s loss to Shamrock Rovers. “They [Longford] have got to the playoff final because they have won games, and when you’re the Premier Division team it’s because you haven’t, so it is that. But if we perform like we did tonight I will have no doubt that we’ll pick up a result and win the game on Sunday.”