Michael Walker: Mourinho is entitled to slow start to season 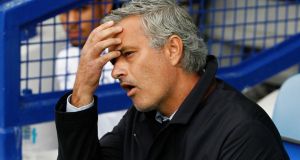 Jose Mourinho during Chelsea’s 3-1 defeat away to Everton: in eight of the last 14 seasons – from Portugal to England to Italy to Spain – one of his teams has won the league. Photograph: Action Images via Ed Sykes/Reuters

The night before the 2004 Champions League final between FC Porto and Monaco in Gelsenkirchen, Jose Mourinho received a knock on his hotel room door. It was from a Porto director informing his manager of messages the director had on his mobile phone. Mourinho looked at the number and called it.

“Consider yourself a dead man,” were among the words he heard coming down the line.

As the man threatening Mourinho was a known figure in Portugal’s underworld, security was stepped up immediately.

When Porto returned home with the trophy, there were two buses on the runway at Oporto airport: the team got on one to head off to celebrate; Mourinho and his family got on the other, which, “took us home and let me see the celebrations on television”.

So as situations go, Mourinho has known at least one worse than losing to Crystal Palace and Everton in consecutive Premier League games.

“It was the greatest moment of our careers, yet the celebrations were odd because Mourinho wasn’t there,” said one of Porto’s then forwards, Benni McCarthy. “He knew he was leaving for Chelsea, the club knew it, too. Crucially, so did the fans, which meant death threats for him. I thought he’d still celebrate, but I think Jose was worried about the safety of his family.”

Mourinho departed Porto and the rest we know. With Roman Abramovich’s wealth, Mourinho revolutionised Chelsea and the Premier League. With rather less resources, he won the Champions League for the second time with Inter Milan. He then picked the wrong fights and possibly the wrong club in Real Madrid and he is back at Chelsea, in May taking them to their first league title in five years. Aged 52, he is as effective as any manager on the planet.

And yet from the froth generated in the past week, you would think Mourinho is some kind of novice, someone who has not experienced difficulty or managed from the ground up.

True, Chelsea have not started the domestic season too well. But then neither Manchester United nor Arsenal have flowed, and have you seen the state of Liverpool?

City’s European problem brings us back to Mourinho and Porto. Against Juve, City replaced £48 million Raheem Sterling with £54 million Kevin De Bruyne; at Porto, Mourinho won the Champions League with the likes of McCarthy, who was a good player but who might not make today’s Man City bench.

McCarthy was an exception in that Porto squad. In the 2004 final, eight of the starting XI were born in Portugal. Mourinho forged a team from native talent.

While this week there was an obvious temptation to see an echo of Chelsea in the autumn of 2007, when Mourinho left the club under a thundercloud, it is equally valid, if we are searching for instruction, to recall the magnitude of Porto’s achievement.

Having won the Uefa Cup the previous season, beating Celtic in the final, of course, Mourinho then drove Porto out of a group containing Real Madrid and past Manchester United in the last 16. Lyon and Deportivo La Coruna were then overcome and Monaco were beaten 3-0 in the final.

A 19-year-old from Brazil, Carlos Alberto, opened the scoring. He soon returned to Brazil, then resurfaced in Europe unsuccessfully at Werder Bremen. Mourinho had signed Carlos Alberto and got the most from him.

The second and third goalscorers were Deco and Dmitri Alenichev. Mourinho inherited both and in Deco he was given a natural. But Deco did not win in Europe until Mourinho arrived.

Deco then franked his pedigree by winning the competition with Barcelona two years later, which is more than can be said for Alenichev. He was excluded from the Porto team when Mourinho joined. Mourinho brought him in from the cold.

There have been 10 cups in that time too, not least two Champions Leagues.

Surely a manager with this record is allowed a slow start to one season. He is even entitled to one long bad season, maybe two or three.

Whether a big-time manager gets that time any more is doubtful – though Mourinho would insert Arsene Wenger’s name here.

With Mourinho comes this kind of niggle, plus the added complication of an ego big enough to have its own postcode. It causes conflict, such as with the Chelsea doctors this season, and there is always the suspicion that Abramovich and Mourinho is a relationship in progress.

At various points along the way even Mourinho must have asked himself why he provokes enmity. Then again, maybe he just looks at his heaving trophy cabinet and thinks it carries more weight than a two-game losing “streak”.

Darren Kelly out at the Boundary

Kelly lost his job at Oldham Athletic last Saturday . The 36-year-old from Derry had lasted nine games at Boundary Park, the same number Mourinho had at Benfica in 2000.

Kelly was dubbed a man from nowhere when appointed in May. He had been working in Sunderland’s academy.

Immediately embroiled in a Twitter row over his admiration for Martin McGuinness, Kelly was literally in a corner when I visited him in his office a few days later. He was smiling through then, threats and all.

His inexperience did receive attention – just not as much as his background on the Creggan – but that was the concern.

In a notoriously tough and selfish environment, how could Kelly win over the players at Oldham?

On Saturday that team lost 5-1 at home to Peterborough. After that Kelly was gone, replaced by the rather more well-known David Dunn, the former Blackburn Rovers and Birmingham midfielder.

Kelly has his coaching badges to fall back on, and the support of Brendan Rodgers. It is support Rodgers may seek himself soon, from Mourinho and Kelly.

1 Gerry Thornley: Wild reactions to this Ireland team as fickle as the wind
2 Five Golf Classics for you to tee up at in 2020
3 Munster were fever-tested when they arrived in Italy
4 IRFU not consulted prior to Minister Harris’ recommendation to cancel Ireland v Italy
5 Rick Reilly: Trump is the worst cheat ever on the golf course
Real news has value SUBSCRIBE
Crossword Get access to over 6,000 interactive crosswords