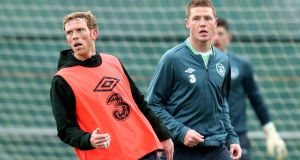 Paul Green and James McCarthy in action during training in Malahide yesterday. The Leeds man lined out for the “probables” in training before the departure for Stockholm. Photograph: James Crombie/Inpho

Speaking after attending his first training session of the week in Malahide following his late arrival in Dublin due to illness, Tardelli was emphatic about the striker’s contribution. But, citing in particular the physical presence that Conor Sammon can bring to the team, he said that Trapattoni was entitled to look to others on this occasion. He also insisted the way that Doyle had been told of his exclusion was entirely normal in international football.

Earlier, in an interview published on the Wolves website, Doyle had made it clear he feels he deserved a little more from the manager.

“I was very disappointed to come in after the game (Saturday’s 2-1 victory over Bristol City in which the Irish man scored the winner) to a text message saying I wasn’t to travel to Ireland to join up with the squad,” he said.

Phone call
“I have been in every squad when I have been fit for seven-and-a-half years. I thought I might get a phone call but it wasn’t to be and I haven’t spoken to the manager about it.”

Tardelli, though, insisted Doyle’s standing with the management team is not in question and that he will all but certainly be back. He did suggest that even a text is an improvement on the old days.

“Kevin Doyle knows that we love him,” he said. “We owe him a lot because he has given us on the pitch many, many things. He has worked very hard for us and we are very happy with him. But there are 40 players in the squad and this is not the last time Kevin Doyle will be back here.”

As for the method chosen for communicating the bad news, he said: “If the boss had called him, then you would say to me it was better if he had sent an SMS; if the boss has sent him an SMS, you would tell me it is better to call. It’s normal. I sent an SMS also to Whelan to check if he felt well or not, because after the first half of the last match he came off. So I sent him the message. I can’t call all players because they are out or not.

‘No messa ge, no call’
“But it’s normal. Nobody sent me a message or called me when they decided to leave me out or when I finished playing in the national team. That was normal; no message, no call, nothing.”

He acknowledged, nevertheless, it was natural Doyle is upset. “No, I know the player is disappointed and it’s normal as a player.”

Doyle’s comments, as it happens, proved to be the only serious distraction for the management team prior to the squad’s departure for Stockholm yesterday afternoon. Training went well, at least up to a point, with everybody taking part, including Jonathan Walters , who was fully recovered from the ankle problem he sustained in a clash with Shane Long on Tuesday.

“To be fair, he caught me on the side of my nerve,” said Walters. “I’ve had bad ankle injuries before and the pain was worse than the lot, but I’m fine.

“I came across him; I was trying to block him so it wasn’t his fault. He thought he hurt me but half an hour later I was fine. My ankle was on fire for 30 minutes, but once I got back to the hotel it was fine and I trained okay today.”

On the strength of the end-of-session game, which is usually a very strong indicator of Trapattoni’s intentions, Long is still on course to start with Walters set for the bench.

Comfortably outplayed
The manager might, however, be just a little concerned by the way his “probables”, were so comfortably outplayed at time by the “possibles” yesterday with the passing of a midfield that included Wes Hoolahan, Jeff Hendrick and James McCarthy all proving a little too much for one built around Glenn Whelan and Paul Green.

Walters, for one, didn’t seem to have given up hope afterwards of Trapattoni having a change of heart between now and kick-off time. “You never know,” said the Stoke City striker, “we have a couple of days’ training yet.”

Tardelli agrees, observing: “It can all change in 10 seconds,” but, inevitably enough, he still defends the selection of Green over McCarthy even as he maintained that it might not actually have been made.

“Every choice is a big choice,” he said, “and a difficult choice, because we have good players and we need to understand whether we need this player or another for this match. It doesn’t mean that we prefer one player over another – we like all of the players. But it’s possible sometimes to decide on one player because we think that it’s better for this match.

It remains to be seen, of course, how not being so hot at distributing the ball against them might go for us.