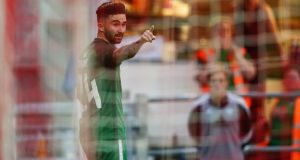 Three second half goals from Sean Maguire wrote him into the history books with Cork City’s first ever European hat-trick as the Leesiders progressed into the second qualifying round of the Europa League¸ the scoreline slightly flattering them against a battling Levadia Tallinn side at Turner’s Cross.

A controversial second for the Estonians - in which an evident handball was missed - saw the visitors going into the half-time break 2-1 to the good against a disjointed Rebel Army, but Maguire’s goal 36 seconds into the second settled the nerves. The Kilkenny native capped off the night with two more goals, securing a 4-2 win on the night, and 6-2 on aggregate.

The vast majority of the 6,314 assembled at Turner’s Cross expected a comfortable home win, but were left shocked as Evgenii Kobzar was given too much space to run at the Rebel Army back four, before switching the ball onto his right foot and sticking it into the bottom right-hand corner of the net.

The Rebel Army equalised through Karl Sheppard’s stooping header but an obvious Kobzar handball was missed by assistant referee Johann Gudmundsson before he beat Ryan Delaney and crossed for Nikita Andreev to head the Estonians into the lead at half-time.

City pulled up their socks at the interval, however, and this time Sheppard turned provider, firing in a low cross which Maguire deftly flicked into the far corner of the net to settle City nerves.

Maguire, who has so often has been the main man on Leeside, then reached another landmark by scoring his fifth European goal, overtaking Dan Murray as City’s all-time goalscorer, and just before the end headed home a corner to seal his hat-trick and again steal the headlines.

The Leesiders will now face AEK Larnaca in the second round.