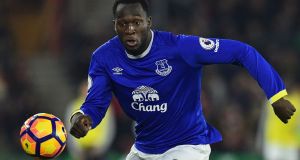 Sources at Everton have stressed that there is some way to go before Romelu Lukaku ’s move to Old Trafford could be considered complete . Photograph: Getty Images

Manchester United are convinced they are close to securing Romelu Lukaku for a fee of around £75m (€85 million) despite indications from Everton that a deal has yet to be agreed, and Chelsea’s private insistence they remain in the chase for the Belgium forward.

The confidence at Old Trafford is such that sources have indicated the player, who is currently on holiday in Los Angeles, could be signed in time to join up with his new team-mates as they continue their pre-season in the United States. Jose Mourinho’s squad depart on Sunday for that five-game tour and hope to confirm the striker as the second most expensive signing in their history, behind Paul Pogba.

Yet sources at Everton, who retain an interest in United’s Wayne Rooney, have stressed that there is some way to go before any transfer could be considered complete, with the Merseyside club now expecting Chelsea to step up their own attempts to sign the striker. Antonio Conte had identified Lukaku early on as his main attacking reinforcement, and replacement for the out-going Diego Costa, and the Premier League champions have not ruled themselves out of the pursuit despite confirmation of United’s bid. Indeed, they have noted Everton’s denial that a deal has been struck with interest.

Their own confidence appears to be forged on a belief that Lukaku’s preference has always been to re-sign for the club he left back in 2014 for €31 million.

Yet they are now under pressure to counter United’s offer with one of their own, despite the fact they have been unable, as yet, to off-load Costa. Atletico Madrid are expected to launch their own bid for the Spain forward, though it remains to be seen whether they match Chelsea’s valuation.

Losing out on Lukaku would represent a significant blow to the London club, and place further strain on Conte’s relationship with the board. Reports in Belgium have suggested the Italian has spoken to the Everton forward over recent weeks, outlining where he sees him in his first-team plans and stressing his significance to the side’s approach, and had envisaged the deal being completed before his own squad return for pre-season training next Monday.

The manager has been frustrated to date at his club’s inability to add to his options, with only Willy Caballero, on a free transfer from Manchester City, confirmed to date and the likes of Asmir Begovic, Nathan Ake, Tammy Abraham and John Terry having all departed either on permanent or long-term loan deals.

Conte, who had infuriated the hierarchy by texting Costa to inform him he was no longer in his plans, has pinned much on Lukaku’s addition, and the onus is now on the board to lodge their own bid with Everton.

The alternative options for Chelsea would, ironically enough, be Alvaro Morata - whom United had previously targeted only to drop their interest after the Spanish club refused to lower their asking price of €90 million - or the Torino forward, Andrea Belotti, though both know they were always second-choice to Lukaku.

Should Lukaku complete a move to Old Trafford then he would become United’s second summer signing after the arrival of Benfica’s Swedish centre-back Victor Lindelof for €35 million. The club’s manager, Jose Mourinho, had also expressed some frustration with the lack of progress on signings as he had said early on in the summer that he wanted as many new arrivals in place before they set off for their pre-season tour. Guardian Service

Fairyhouse and Punchestown festivals cancelled as National Hunt season ended 17:48
Wimbledon will not be held this year due to coronavirus crisis 16:51
Playoffs set to be moved again as Uefa prioritise European club competitions 15:59
Harrington would prefer 12 picks over delayed Ryder Cup 09:06
Australian rugby staring into abyss as another crisis hits 09:03

1 ‘For 25 minutes I ran out of oxygen’: Pepe Reina on his coronavirus battle
2 Garry Ringrose to stay with Leinster as he signs two-year central contract
3 Australian rugby staring into abyss as another crisis hits
4 Dr Claire Molloy: ‘It is a privileged place to be, on the frontline’
5 Six Nations rugby needs to be protected for terrestrial TV
Real news has value SUBSCRIBE