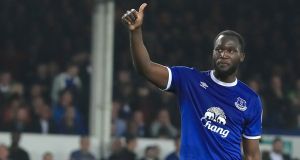 Manchester United have agreed a £75m (€85m) fee with Everton to buy Romelu Lukaku and hope to push through a deal before they fly to the United States on Sunday.

United have ended their interest in Real Madrid’s Álvaro Morata to pursue Lukaku, whose instinct has been to re-sign for Chelsea. He was sold from there to Everton by José Mourinho, who is now the manager at Old Trafford.

Wayne Rooney, who is in talks with Everton over a return there from United, will not be part of any deal for Lukaku.

United had been in discussions with Real Madrid over the possible signing of Álvaro Morata but became frustrated when the Spanish side refused to budge on their asking price of €90m.

Mourinho had become frustrated with the lack of signings this summer with Benfica’s Swedish centre-back Victor Lindelof the only player to join so far, despite telling the club that he wanted as many new arrivals as possible to go on the pre-season tour.