Champions leapfrog Atletico Madrid after grinding out win away at Malaga 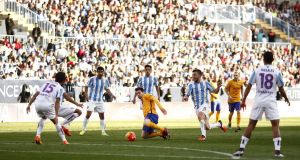 Munir El Haddadi, deployed up front in place of the injured Neymar, fired Barca ahead in the second minute at the Rosaleda Stadium on the south coast after smart work from Luis Suarez.

However, the visitors were unable to exert their customary control and Malaga, whose relentless pressing unsettled the Spanish and European champions, netted a deserved equaliser in the 32nd minute.

Javier Mascherano surrendered possession in a dangerous area and the ball fell to midfielder Juanpi whose shot was deflected in off the former Liverpool player as he slid across to block.

Messi was back in the side after sitting out Wednesday’s 2-1 cup triumph at Athletic Bilbao as a precaution but the Fifa Ballon d’Or winner was largely anonymous in the first half.

Barca were much improved in the second period and took a 2-1 lead in the 51st minute when Messi cracked Adriano’s cross past keeper Carlos Kameni.

The Argentina captain was falling away from the ball as it dropped and he caught it perfectly on the volley to send it arrowing into the corner for his 11th goal of an injury-disrupted campaign.

Barca keeper Claudio Bravo then did well to palm away a shot from Ignacio Camacho in the 73rd minute and Kameni denied Messi a second with a superb one-handed save two minutes from time.

“We perhaps didn’t deserve to be drawing 1-1 at the break considering what we did and what they did in the first half,” Barca captain Andres Iniesta told Spanish television.

“We didn’t feel comfortable and Malaga were very well organised and made the most of it when we gave the ball away,” added the Spain international. “It shows how difficult it is to win in La Liga.”

Barca are on 48 points, one ahead of Atletico before Diego Simeone’s side host seventh-placed Sevilla on Sunday.

Real Madrid are four points adrift of Atletico in third place ahead of Sunday’s trip to Real Betis who are 15th on 21 points.

Qatar-owned Malaga are 12th on 24 points.

Villarreal, who are fourth with just over half the season played, can draw level on points with Real with a win at Espanyol later on Saturday, before fifth-placed Celta Vigo play at Rayo Vallecano and Granada host Getafe.

Michael Walker: Watford’s survival could be in good hands with Pearson at the helm 07:00
Irish squad in the dark as clouds hang over Six Nations 06:00
Weekend hurling previews 06:00
Three Munster Academy players selected for Pro14 clash with Scarlets 06:00
Friend warns Connacht need to be at their best in must-win Southern Kings clash 06:00

1 Getting behind the rotten core of rugby with Dan Tuohy
2 Irish squad in the dark as clouds hang over Six Nations
3 Ryan Baird scores a hat-trick as blue wave rolls over Glasgow
4 Football fan survey: Almost half of Irish adults say they support a club
5 Football fan survey: Manchester United still top the league among Irish fans
Real news has value SUBSCRIBE
Crossword Get access to over 6,000 interactive crosswords