It took until extra-time for the southsiders to win out 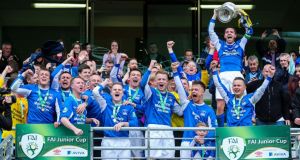 It was fairy-tale stuff for Liffey Wanderers at the Aviva Stadium on Sunday as they beat Sheriff YC to win their first ever FAI Junior Cup.

The first-time finalists opened the scoring with the game just five minutes old when an incisive run by Aidan Roche forced a foul 30 yards out. Anthony O’Connor stepped up to float a cross that was headed into the net from eight yards by his brother Lee.

Liffey nearly made it two on the quarter hour mark when Gary Young pounced on a loose ball inside the box, and smashed his effort off the crossbar to the relief of Sheriff who were playing some good football, despite being harried at every opportunity by Wanderers.

Liffey now dropped deep but to their credit, they kept their shape, and their lead, throughout the first half.

Unable to break through the Liffey defence, Sheriff were forced to rely on set pieces. In the 23rd minute Darren Dunne sent his corner low to the edge of the box for John Rock to curl a shot towards the top corner, saved brilliantly by Philip O’Connor.

In the second half, Liffey continued to cause problems with Aidan Roche proving a handful for the Sheriff defence but the northsiders were getting a grip on the game and began to dominate proceedings.

Darren O’Brien, Anthony Kavanagh, Sean Murphy and Keith Dunne all contributed to efforts in front of an increasingly frustrated and sizeable northside support, but they couldn’t beat O’Connor in the Wanderers goal.

Things got worse for Sheriff in the 91st minute when veteran front-man, John Rock, was shown red after he was adjudged to have dived in the box by referee Conor Byrne. But persistence paid off for the northsiders and, in the dying moments, substitute Kevin Lynch played an excellent cross to find John Lester whose get out of jail goal sent Sheriff into rapture and extra time.

However, Liffey again showed their mettle and eight minutes in, Aidan Roche found Stephen O’Callaghan unmarked. O’Callaghan didn’t waste the opportunity, finding the back of the net from 25 yards out to restore the lead and provide a first FAI Junior Cup victory for the south-siders.

In the intermediate final, which was played before the junior match, Crumlin United were crowned champions after beating Tolka Rovers 4-0, the goals coming from Alan McGreal, Ger Rowe, Greg Moorehouse and Patrick Cannon.