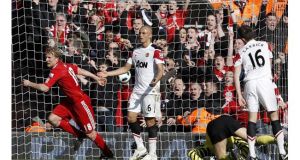 Liverpool 3 Man United 1: Dirk Kuyt scored a hat-trick and Luis Suarez ran Manchester United ragged as Liverpool showed they weren’t quite ready to allow their great rivals surpass them in the record books. It was the perfect birthday present for manager Kenny Dalglish, one that leaves the door ajar for league challengers Arsenal to deny United an unprecedented 19th title.

Kuyt’s goals came from a combined total of around eight yards, after he was twice set-up by Suarez and gifted a point blank header by a wayward Luis Nani clearance. Javier Hernandez headed an injury time consolation for United but Alex Ferguson’s side were outfought and outplayed by the homeside and scarcely deserved that.

It leaves United just three ahead of Arsenal, having played a game extra and with a trip to the Emirates Stadium next up.

The afternoon was capped off with a long-awaited debut for €41 million record signing Andy Carroll after more than two months on the sidelines with a thigh injury.

For United their second-choice central defensive partnership of Wes Brown and Chris Smalling, deputising for the suspended Nemanja Vidic and injured Rio Ferdinand, never looked comfortable on an afternoon when very few of visiting team reached anywhere near the exacting standards Ferguson demands.

They still remain top of the table, and it is difficult to bet against them being in that position come May, but two defeats in five days — having lost at Chelsea in midweek — leave plenty of questions to be answered.

While Carroll had claimed all the adulation prior to kick-off, when the action got going it was his fellow January arrival Suarez who had an effect where it mattered most.

The Uruguay international, a €26 million transfer from Ajax, had one early effort prodded at Edwin van der Sar but that was merely a precursor to a piece of brilliance to set up the opener.

When he collected the ball on the left of the penalty area his route to goal was blocked by a number of opponents but his quick feet saw him weave past Rafael, Michael Carrick and Wes Brown on his way to the byline. From there he squared the ball through Van der Sar’s legs to present Kuyt with a tap-in from just inches.

Suarez could claim to have had a hand in the next one too — but the main credit had to go to Nani, who had a defensive aberration. The Portugal international inexplicably headed the Uruguayan’s cross back into his own six-yard area where Kuyt gleefully nodded in.

Liverpool’s lead was fully deserved but it had been United who had come closest to scoring prior to Kuyt’s 34th-minute strike.

Dimitar Berbatov, scorer of a match-winning hat-trick in their Old Trafford league encounter, volleyed Wayne Rooney’s knockdown against the outside of Jose Reina’s right-hand post.

The rivalry between the teams, England’s dominant pairing over the last four decades, was evident in the closing stages of the first half. Jamie Carragher, switched to right-back after Fabio Aurelio went off injured, was lucky to escape with just a booking after a reckless shin-high tackle on Nani. However, the Portuguese, already at fault for the second goal, disgraced himself by collapsing to the floor and bursting into tears when Steven Gerrard placed a hand on his shoulder.

After the ensuing melee Nani departed on a stretcher, replaced by Javier Hernandez, and Van der Sar was cautioned.

Rafael also benefited from referee Phil Dowd’s leniency after a high challenge on Lucas Leiva earned him, and Martin Skrtel for his retaliation, a booking.

The second half began with United, not unexpectedly, having their best spell and for 20 minutes it appeared a goal was imminent.

Ryan Giggs, breaking Bobby Charlton’s record of 606 league appearances, met Rooney’s cross with a first-time shot which whistled just over the crossbar to serve as a warning that the game was far from finished.

Meireles had to clear off the line for the second time in the match to prevent Berbatov’s close-range header going in while Giggs curled an 18-yard free-kick over.

More gaps were appearing in the visitors’ defence, though, and when Kuyt put Meireles clean through Van der Sar came to the rescue by palming his angled shot away.

The Dutchman was at fault in the 65th minute, however, when he spilled Suarez’s free-kick and his compatriot knocked in the rebound.

Carroll’s long-awaited debut arrived in the 74th minute when he replaced Meireles to a rapturous reception and his first touch was a goalbound header.

Kuyt’s supreme confidence saw him attempt a 25-yard volley which screamed wide while Gerrard twice hit low shots either side of each post.

Hernandez scored a late headed consolation from Giggs’ cross in added time but it hardly raised a cheer among the visiting fans.