Tottenham Hotspur play with great intensity but there’s a problem: team has only one gear 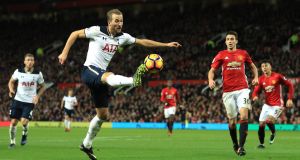 As a results-oriented manager who gets irritated when other managers are complimented for their pretty football, Jose Mourinho has usually been one of those football men who says the table does not lie.

Now that Manchester United are in sixth place, 13 points off the top of the table, Mourinho is bending his own rules a little bit. In his programme notes for yesterday’s match against Spurs at Old Trafford, Mourinho expressed the view that United “are in the top three teams in the Premier League in terms of the quality of our performances”

Not only that, he went on to tell Sky before the match that Spurs, who started the day in fifth, were the “best” and “most complete” team in the league.

Most people would probably bestow that title on the current league leaders, Chelsea, who are on a run of nine consecutive wins. Antonio Conte’s team has power, speed, skill, discipline, intensity, a great goalkeeper: you name it, Chelsea have it, and more of it than anyone else in the league at this moment.

There is no need to waste time in speculation about why Mourinho might not want to give Chelsea much credit. Suffice it to say that yesterday’s match at Old Trafford made his opinion about Spurs look rather strange. Only a coach with no interest in the attacking side of the game could look at this Spurs team and consider them “complete”.

Mkhitaryan, making only his second league start of the season, seemed to take out months of frustration on the ball, lashing it high into the net past Hugo Lloris.

Mourinho had never really explained to anyone why Mkhitaryan had been left out of the team for so long. The player was simply told in vague terms that he didn’t defend enough. Mkhitaryan knew that United hadn’t bought him because of his defensive qualities, they had bought him because he was the outstanding creative attacker in German football. In his position, a lot of players might have complained.

Mkhitaryan speaks seven languages – Armenian, Russian, Ukrainian, German, French, English and Portuguese. He also understands the language of power and so he decided, wisely, not to take Mourinho on. Instead he kept working, kept training, and kept believing that this absurd Josef K-style nightmare would come to an end.

In the end, Mourinho had to tacitly admit he was wrong and put him back in the team. Mkhitaryan has shown with his performances in the last two weeks that he deserved to be there all along. It’s typical of his luck that just as he had sealed his status as a first-team player for the foreseeable future, he went down with an ankle injury and left the field on a stretcher.

Unfortunately, all they did with that possession was make a mockery of the idea that they are the most complete team in the league.

Spurs have been struggling to score all season. Part of the problem is that Harry Kane was injured for a few weeks and hasn’t hit the goal-a-game form he has shown himself to be capable of.

But watching them trying to break down that well-organised Mourinho defence, you could see that there is another problem: this team only has one gear.

Spurs play with great aggression and intensity, but these are not the only qualities that win matches. And whenever they encounter a problem, Pochettino tries to solve it with more intensity, more aggression.

When Spurs drew with Leicester at the end of October, Pochettino acknowledged that struggling to score was “a characteristic” of his team. “We need our second line to score more, to be more aggressive in the last third. Maybe we’ve lacked aggression in our second line in the last few games too. We’ve got to be more determined to score, not only play well.

If anything, Spurs could do with being a little less aggressive, and a little more varied. They’re always in too much of a hurry, and that makes them predictable. If you are defending against Dele Alli, you know he’ll always try to play the earliest ball he can. It takes away the element of surprise. Good defenders know what is coming.

The only Spurs player who tries to change the tempo of the game is Mousa Dembele, and it was no surprise that their challenge completely collapsed after his withdrawal with 20 minutes to go. Pochettino’s team have been good at running their opponents off the pitch, but they need to learn how to win games at walking pace before anyone starts using words like “complete”.