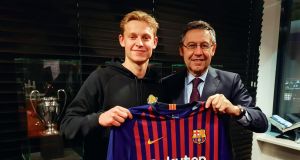 What sort of emotions do footballers feel upon signing the contract that takes them to one of the biggest clubs in the world? Jubilation, exhilaration, vindication, maybe a touch of trepidation? For Frenkie de Jong, there must also have been a large measure of relief.

On Wednesday the 21-year old Ajax midfielder announced that he would be joining Barcelona at the end of the season for a minimum €75 million. After a year in which his next career move has been the subject of constant public speculation, the announcement meant that people could finally leave him alone. “It’s nice that I have peace and can play football freely. Now everyone can go and focus on Matthijs de Ligt, ” he said, and you knew he was not entirely joking.

Returning to Ajax for pre-season training last summer, the player admitted that the unceasing transfer talk had already become hard to handle. “The talks about a possible transfer are still going on. I see all the newsflashes, everybody tells me stuff. At first I thought it was kind of funny, but after a while I was thinking ‘does this ever stop?’ But besides all that, my summer was quite normal.”

That’s how it goes now when you are an object of desire for several of Europe’s biggest football clubs, with their overt and covert PR machines all working to make the deal happen for them. The big transfer sagas now go on for so long and with such head-melting intensity that by the end the player at the centre will do anything just to make it stop.

For Barcelona’s directors, perhaps the best thing about getting De Jong was the knowledge that their rivals had wanted him so badly. Pep Guardiola was among those disappointed by the news, suggesting that if Manchester City wanted to compete for players like De Jong in the future, they would “have to be quicker, faster and don’t get nervous”.”

City’s apparent nervousness over De Jong might be related to the fact that they are currently under investigation by Uefa’s club financial control body over allegations that they breached financial fair play (FFP) rules. Perhaps now is not the best moment to unleash shock and awe upon the transfer market.

FFP concerns might also have cramped the style of PSG, whose president, Nasser Al-Khelaifi, is said to be furious at losing out on De Jong. The French club had believed as recently as the end of December that he would be theirs.

Perhaps the hardest detail for Paris to swallow will have been yesterday’s reports in the Spanish daily AS, claiming that Barcelona executives helped De Jong to make his mind up by showing him WhatsApp messages from Neymar, in which the Brazilian allegedly complains about his situation at PSG and vainly appeals for a return to Catalunya.

Ah, Neymar. The star who felt so cold in Messi’s little shadow is currently at the heart of a massive YouTube ad campaign for an internet shopping company. In these ads “Ney” is typically hanging out playing video games when he gets the idea to buy something online. Next thing you see him opening up a cardboard box that contains his delivery – a consignment of cheap digital cameras, a fleet of drones (what is he planning?).

The campaign was obviously supposed to coincide with the moment when Neymar’s season kicks into overdrive. When he moved to France he understood that everything would turn on his performance in the Champions League knockout rounds, the handful of elite-level matches every spring that will determine whether his decision to join PSG is ultimately seen as a career-defining error, or just a lucrative one.

Except Neymar’s participation in these matches is now in doubt, because he has suffered another injury to the fifth metatarsal of his right foot – the same one he cracked last spring, between the first and second legs of PSG’s second-round Champions League defeat to Real Madrid. That injury finished his first season at Paris and when he thinks about the prospect of being kept out of the big competition for a second year in succession by another injury to the same small bone, it must feel like the universe is laughing at him behind his back. It was no surprise to hear Thomas Tuchel admit last week that “Neymar is sad”.

Neymar’s experience shows that it takes only a little bit of bad luck to derail a plan underwritten by hundreds of millions of euro. But as transfer budgets grow and attention spans erode, it doesn’t even have to be something as fundamental as a cracked bone that makes the difference between success and failure.

Look at Philippe Coutinho. In January 2018 he had just sealed his own €160 million transfer to Barcelona and his happiness seemed complete. The only thing that was missing was a clear idea of where he was going to fit in the team.

A year on, Coutinho’s numerous critics are complaining that it is difficult to know what to do with a player who neither the stamina to play in midfield nor the speed to play on the wing. Some go further and suggest that, despite his sublime technique, Coutinho lacks the crucial extra dimension of football intelligence that is demanded from Barcelona players in every position. The player has never before had to face such sustained questioning of his basic abilities.

You could argue that if any of these criticisms were accurate, surely Barcelona would have noticed before they paid €160 million for him. But that would be to assume a big club like Barcelona makes rational decisions. In fact, many of their biggest moves are driven by emotion.

Barcelona’s true purpose in signing Coutinho was to re-establish their position at the top of the European transfer food chain. PSG had rattled them by buying out Neymar’s contract, and the message Barcelona sent by signing Coutinho was: “I am the one who knocks.” The player now has to face the likelihood that what really got Barcelona excited about him was not the having, but the getting. You hope Frenkie de Jong has better luck.

1 Suarez’ Italian language exam rigged according to prosecutors
2 What next for green jersey hero Sam Bennett after toughest of Tours?
3 Awarding of 2023 Rugby World Cup to France part of Laporte investigation
4 LeBron James has become this generation’s Muhammad Ali
5 Why this weekend’s Champions Cup semi-finals are still worth watching
Real news has value SUBSCRIBE
Crossword Get access to over 6,000 interactive crosswords