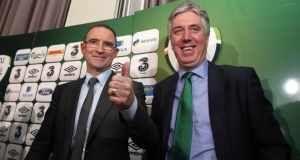 Martin O’Neill says that he is fully committed to getting Ireland to the next European Championships and admits that his job depends on it, with the 61 year-old northerner telling the media at lunchtime today that his remit is to get the team to France: “My contract lasts for the time that Ireland are involved in the championship and that (going to the finals) is my ambition.”

The northerner was impressive as he spoke about the task he is taking on, the man he has chosen to assist him and the challenges he faces on both fronts at the Gibson Hotel.

There was plenty of humour and a fair bit of humility but the former Celtic boss made it clear that he had taken on the job with the intention of succeeding at it. Doubts about whether he was hanging on in the hope of a Premier League job coming up had been raised over the last few weeks but the new manager insisted that his delay had been influenced by doubts about how he might adapt from the day-to-day involvement with players that is a part of the club game to the different demands of working with an international team.

“That’s the thing I was pondering over most ... not the fact that it was the Republic of Ireland, quite the opposite, (but) if you lose a (club) football match then you always feel you feel you at least have a chance to put it right the following week; I don’t know what I’ll feel like in a situation like this.”

Roy Keane, predictably enough, got plenty of mentions, but O’Neill patiently restated his expectation that the Corkman will be a major asset to the new setup. “A bit of volatility never did anybody any harm,” he joked before saying that he saw the younger man’s role developing over time. But, he said, “we’ll obviously get to as many games as possible and I’ll liaise with him. I’m absolutely delighted that he’s involved; he was a great, great player, one of the greatest in the Premier League since its inception.

“I’ve found him very engaging and I’ve found his thirst for knowledge amazing. I think like all of us in football he has points to prove and I know how polarised views can be in relation to him but I don’t have a problem with that.”

He went on to suggest that if there were problems he “might call Alex Ferguson and see how he dealt with it,” before, not for the first or last time over the course of the afternoon, taking care to clarify that he was just joking.

Having acknowledged that his longer term future in the role depends on Ireland’s shorter term success, O’Neill said he had met with some of the association’s youth coaches this morning and had been glad to hear that the underage international sides contain some outstanding prospects.

He made it clear, however, that he will look to involve anyone and everyone who he feels “can be of value to the Republic of Ireland set up”, and added: “I will certainly have an open mind. I’m hoping, of course, that in the next eight or nine months somebody erupts on to the scene that you can’t leave out of the team, but like anything else, I’m dependent on my best players being available for the big games.”

As for tactics, he said he wouldn’t be tied to anything. “There’s not a system that I’m not aware of and there shouldn’t be at this stage. At different times I’ve used different systems, though, and I’d like to develop a style of play without losing the inherent spirit of the squad.”

Ultimately, he said, when asked about attracting fans back to games: “I’d like to win with a bit of style and a bit of panache.”

The former Nottingham Forest star was highly respectful towards Giovanni Trapattoni and suggested, when it was put to him that the Italian had not always been so polite about the league of Ireland, that some of what his predecessor had said might have gained an unintended edge in the translation. He made it clear, however, that not only would he be watching Irish players up and down Britain, but that he would be a regular here in Ireland too.

In the end, he said, the simple aim is to guide the team to success again. “my enjoyment will come from winning,” he said, “I’m delighted to have the opportunity of the challenge.”

1 Ireland 23 Georgia 10: How the Irish players rated
2 Ireland’s autumn of discontent continues with abysmal Georgia showing
3 No fireworks but Limerick get the job done against Galway
4 Jim McGuinness: There is a way to save championship and make it competitive
5 Ireland grind their way to grisly win over Georgia
Real news has value SUBSCRIBE
Crossword Get access to over 6,000 interactive crosswords