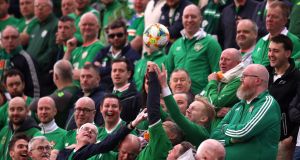 The ball goes into the Ireland supporters during the Euro 2020 qualifying match against Gibraltar at the Victoria Stadium. Photograph: Alex Pantling/Getty Images

It was, said Jim Beglin, “the kind of game where you have to keep your high balls low”, the gustiness of the conditions necessitating at least an effort to play football in or around ground level.

Not least because if there was any hoofing out there, the flights at Gibraltar International Airport would have had to be grounded. Indeed, viewers would have held their collective breaths in those early stages when Gibraltar’s Liam Walker shaped up to take a free at the edge of the Irish box with the tempest behind him, just as an EasyJet was taking off over Darren Randolph’s shoulder. If Liam had got under the ball too much . . . God forbid.

It was, then, all happening out there. Well, apart from goalscoring in those opening 48 minutes. But at least the focus was now on the match, the lads on the RTÉ panel palpably relieved that we were finally able to focus on football after a week when John Delaney and #Loangate had scooped up all the attention.

Some time later, though, RTÉ’s timing proved a bit unfortunate, their coverage of the evening’s events ending just as word filtered through that Delaney was departing his role as FAI CEO to take up the position of the Association’s ‘Executive Vice-President’. Frankly, Richie Sadlier’s wiggling eyebrows upon hearing the news would have been pay-per-view worthy.

It all began to make sense, though. Midway through the second half the 800 Irish fans in the ground, who George Hamilton had said were “admitted”, like they’d been brought to a hospital for urgent medical attention (insert your ‘they bloody well did after watching that muck’ gags here) began singing “cheerio”. There were we thinking they were serenading the EasyJets heading for Luton, when, in fact, they were bidding adieu to the FAI’s CEO. Decent sources.

Anyway, whatever Delaney earns in his new role, it should pale next to the amount Mick McCarthy picks up in his wage packet. Would he just forget about this game and move on, Tony O’Donoghue asked him come full-time. No, said Mick, he’d watch the entire match again in the morning and “pick the bones out of it”. So, as a nation, we can agree that whatever he’s paid it’s not remotely enough when it obliges the fella to watch those 93 minutes and five seconds all over again.

Before the game, Mick had told Tony that there was a giant butterfly in his tummy, with “big boots on too”, ahead of his first game in charge of Ireland since November 2002, and that the most significant change between him as a man then and now was that he was older. “Me too,” said Tony. By half-time, Mick had the look of a fella who had aged another decade in 45 minutes, possibly pining at that point for the tranquillity of Portman Road and all those abusive howls from Ipswich fans.

So, it was 0-0 at half-time, depriving us of the opportunity to sing “are you watching Declan Rice?” The sole highlight was Beglin calling the Gibraltar captain “Chipolata”, instead of Chipolina, the contest having more of a bangers and mash quality to it than, say, lobster thermidor with a mornay sauce garnished with truffle pate.

“Our best chance was a header from their own defender,” said Stephen Kelly at the break, the downward trajectory of his mouth suggesting that said it all, while Richard Dunne attempted to politely indicate that our XI were a bit thick (“you have to use . . . well . . . intelligence at this level”). Sadlier, meanwhile, conceded “it hasn’t been great”, that understatement almost causing Darragh Maloney to choke, the occasion reminding him of that 0-0 against Liechtenstein.

Second half. Both teams out two minutes early, like they wanted to get it over with. Us lot watching on could relate.

And then Chipolata would have scored only for Darren Randolph’s excellence, the goalie saving us from our wurst nightmare.

Jim and George opted to be positive about the spectacle, so much so you’d think we were playing 1970 Brazil, but the panel was decidedly less upbeat, Darragh even being a little disrespectful when he said “these are Gibraltar . . . with respect to them”.

The one consolation, though, was that we no longer have a manager who would try to persuade us that we actually played like 1970 Brazil, Mick more or less conceding to Tony that we were utter s***e. “I pretty much hated all of that,” he said, his only consolation that we EasyJetted our way out of the place with three points.

“That’s exactly what you want to hear from a manager,” said Sadlier, although you suspect Dunphy would have been peppering the walls of the studio with ballpoint pens.

But no word yet from the FAI’s new executive vice-president. If one of the requirements of his new role is to watch those 93 minutes and five seconds again, don’t hate on him, he’ll deserve a whole heap of compassion, and the meatiest of pay packets.

Five Golf Classics for you to tee up at in 2020 06:00
Out of the shadows: Floodlights a priority for clubs across Ireland 06:00
AFL’s equalisation policies a possible guide for the GAA 06:00
Murphy confident Donegal remain on the right track 06:00
Caelan Doris and Ronan Kelleher make strong case to start against Italy 06:00

1 Gerry Thornley: Wild reactions to this Ireland team as fickle as the wind
2 Caelan Doris and Ronan Kelleher make strong case to start against Italy
3 Dan Tuohy explains ‘rotten to the core’ comments
4 Five Golf Classics for you to tee up at in 2020
5 AFL’s equalisation policies a possible guide for the GAA
Real news has value SUBSCRIBE
Crossword Get access to over 6,000 interactive crosswords