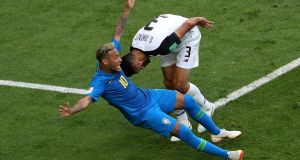 Somebody leaked the BBC’s Gary Lineker telling Pablo Zabaleta what’s coming - possibly because understanding English was an issue and the Argentinean wanted to bawl his eyes out - but Martin and Roy need no plan to pore over the 3-0 capitulation against Croatia .

“This is as close as I’m going to get to criticising Messi,” goes the Republic of Ireland manager. “Best player I’ve ever, ever seen but he has to find space for himself . . . There’s just something about him at this moment that’s not right.

“I’m the very first one to say he doesn’t need to win the World Cup to prove he is one of the best players to ever play the game but he is playing at this moment as if that is a concern to him.”

Brady’s life in London, interrupted by seven seasons shape-shifting through Serie A, made no dent in his Dubliness.

Richie is about to annoy him.

What VAR has established is diving will be caught more often than not but, because of it, referees are fairer game than ever before. Costa Rican heavies make more contact with Bjorn Kuipers than they do Neymar.

No yellow card from the Dutch referee but the blonde Brazilian gets booked for slamming the ball into the ground.

“It looked a bit of a theatrical dive,” says Richie Sadlier. “I think he lost balance and went back, maybe he was looking to draw the foul, but the referee for me absolutely spot on to go to the VAR officials for back up and the referee was right to go back on his decision.

“And I think Liam disagrees!”

“DID THE REFEREE GO TO VAR OR DID VAR GO TO THE REFEREE,” Brady wonders increasingly aloud. “This is what I don’t understand.”

It looked like the Costa Rican abuse cranked VAR into action.

Keane: “I used to give referees a bit of stick at the end of my career.”

Martin O’Neill: “At the end of your career? 15 minutes into it.”

The lesson, kids, is abuse the ref at every turn, because it works at the World Cup and Brady knows it: “What is apparent is that they’re making the decision up there and they are telling the referee.”

Sadlier: “No, the referee made that decision.

Sadlier: “He rode back on his original decision.”

Brady: “Put it this way, Richie, every time the referee has been called over to that TELLYCAMERA he has agreed with why they have asked him to look at it and he’s changed the decision. He’s never confirmed his own decision at all.”

Darragh Maloney offers, “Is that not the technology working?”

Brady: “No, but is it the referee deciding?”

Sadlier: “It is. Every time”

This has been the entire group stages.

Brady: “No, I think he is being told you’ve got to change your mind.”

“Because it is wrong,” Maloney presumes.

“Well, I didn’t think it was wrong,” says Brady.

Michael O’Neill ruins the argument with sensible comment. That’s why he’s managing an international football team and not philosophising on primetime RTÉ.

Maloney steers them back on track.

“In my view,” says Sadlier. “He made what would have been a game changing error. He looked at the technology and that cleared up that he had made a mistake and he is big enough to acknowledge the mistake.”

“I don’t know what you mean that it wasn’t enough of a physical touch,” says Brady.

“I’ll explain clearly what I mean. This is contact.”

“There. Is that a penalty kick?”

“It was a lot more than that Richie, he grabbed hold of his shirt [VAR disputes this] and then LET IT GO.”

Brady could mean, let the argument go (it’s only 3pm) but Maloney does not let it go and eventually Brady has enough, “Okay, let’s finish it now Darragh, when the referee actually says ‘No, I’m going to stick with my decision . . .’” Liam will be happy.

Maloney doubles down, “The one thing we thought VAR would do was it would leave us with nothing to talk about.”

Sadlier: “I don’t know who said that.”

“They are all completely wrong.”