Tennis balls or no tennis balls, Mick McCarthy is a happy man

Malachy Clerkin at the Aviva Stadium 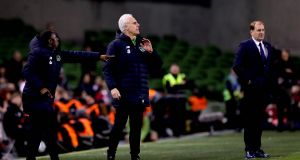 Afterwards, Mick McCarthy walked in and sat down and gave a thoroughly satisfied “Evenin’”. The FAI pressman beamed and gave an equally delighted, “Ladies and gentlemen, Mick McCarthy!” So started the new day at the end of a damn good night.

“I couldn’t have asked for much more,” McCarthy sighed, contented.” It’s a good place to be, isn’t it? Top after two games. No idea whether we can stay there. A lot pleased me tonight. Individual performances, team performance. We stopped them doing what they wanted to do and we did what we wanted to do. So I’m very happy.”

At times over the past week, McCarthy must have wondered had he walked through a wormhole when he landed in Dublin airport, whisking him 17 years back into all our pasts. His last game as a manager in this stadium ended with boos raining down from the stands and a peevish press conference in the old bandroom as the candle got snuffed out on his first reign.

Things are different now but before they came and did this to Georgia, you wouldn’t have said they were great either. Gibraltar on Saturday was a reminder that nothing sucks the soul quite like a terrible Ireland game. John Delaney’s latest glorious mysteries just go to show that the FAI, like the poor, are always with us.

All of it fed into a mood, a low hum of fatalism around the Aviva. You looked through the team as it was announced and you strained your eyes for the name of a striker to pop us. None came. It was an Ireland lineup with more false nines than a hoax police hotline. What formation were they going to play – 4-6-0?

Sorry, Mick. We’re smartarse pessimists just by instinct now. This is what happens when everyone gets beaten down by a year like last year. Everything is crap until proven otherwise.

“They’re new days. It’s a good day. It’s a new start for me, a new start with new players. I loved it. There are some bits that I insist on that we do to stop the opposition. Restarts, our goal kicks, their goal kicks. After that, they are free to go and play how they see it. I thought they did that.”

You could see they were giving him what he wanted right from the start. For the first Georgian kick-out, Robbie Brady manned one corner of the box, James McClean took the other and David McGoldrick pushed right up on the edge of the D. Giorgi Loria in the Georgian goal was dying to play it short to one of his defenders and thought about it a couple of times before gruffly waving everyone upfield. McCarthy’s first small victory.

Soon after, David McGoldrick made his first incision, a willing run down the left channel not unlike the one that led to Jeff Hendrick’s goal on the weekend. The Georgians had their warning and dropped a few yards deeper. Another win.

As a result, any time they tried to get out, Georgia were hurried and hassled and had to launch long, high balls to be gobbled up by Shane Duffy and Richard Keogh. So much winning. The performance built and built from there, Ireland full of energy, if lacking the sealing second goal. But it was enough. The crowd lapped it up, this strange new sensation of enjoying a win and a pulsing performance rolled into one.

“It’s lovely if you can produce both,” McCarthy said. “I did think it was an excellent performance. I thought we could have had two or three goals. If we’d nicked one and sat back, people wouldn’t have been as delighted with it. So it was good to do it like that.

“They ran themselves into the ground. At half-time I said to them, whatever we do we don’t back off. We stay as we are. I told them if they give me that for the next 45 minutes, I’ll take it no matter what happens.”

That’s really all it takes. The Ireland crowd, starved for so long for something positive to cheer, latched on pretty much immediately. Seamus Coleman got in behind, Conor Hourihane strode through the middle, Brady found room at the edge of the box from a corner routine. On each occasion, the Ireland player didn’t execute – Coleman overhit his cross, Hourihane shot straight at Loria, Brady skied his effort - but everyone was on board regardless.

You could feel it. The place was fizzing. Even the tennis ball protest chimed with the mood of the night. The crowd waited until the 33rd minute and made their stand. The fact that Conor Hourihane was standing over the free kick that would win the game didn’t stop them.

And more power to them. If it annoyed Damien Duff and some other ex-pros, so much the better. We should always be wary of the tut-tutting of people who never have to pay into a game.

“To be fair, I was concerned that it would affect our concentration,” McCarthy said. “It wasn’t going to stop his free kick though. Nothing would have stopped it, tennis balls or nothing.”

1 Ireland grind their way to grisly win over Georgia
2 Ireland 23 Georgia 10: How the Irish players rated
3 No fireworks but Limerick get the job done against Galway
4 Jim McGuinness: There is a way to save championship and make it competitive
5 Sordid murder of hurling brothers still resonates in south Galway
Real news has value SUBSCRIBE
Crossword Get access to over 6,000 interactive crosswords