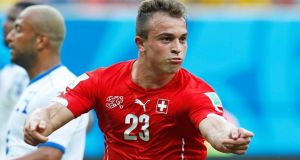 Four years ago to the day, Honduras held Switzerland to a scoreless draw in South Africa, denying Ottmar Hitzfeld’s side a place in the last 16. That game at Bloemfontein encapsulated the insipid defensive style which dominated the dullest World Cup. Brazil, thankfully, has been a different experience and there was no deja vu in Manaus: the Swiss have rolled into the second round courtesy of a stunning hat-trick from Xherdan Shaqiri.

Hitzfeld’s approach four years ago, where they needed to win by two goals, was too conservative. It was a harsh lesson to learn but a mistake that they made sure not to repeat. They were on top immediately here, creating the first opportunity three minutes in when Wilson Palacios was pick-pocketed in his own half. It left Josip Drmic to break and his cross from the left was met by Shaqiri, whose his strike was saved by Noel Valladares.

Every time Shaqiri ran at the Honduras defence he sent them into panic; Maynor Figueroa, in the agricultural fashion that we have come to expect from the central Americans, chopped the 22-year-old down 15 minutes in, while Palacios clattered him two minutes later.

Although Honduras had a larger share of the ball – Switzerland were happy to let them have it – they showed little in attack, relying almost entirely on their physicality and set pieces, a notable weak point in the Swiss armoury. Their only chance of note in the opening period came when Fabian Schär’s conceded a needless a corner and, from the resulting kick, Brayan Beckeles swung wild and wide.

But if they threatened to show any further signs of troubling the Swiss back four, they were soon put back in their box following another defensive mishap. Victor Bernárdez’s lack of control allowed Drmic to break and, again, he fed Shaqiri, who this time steadied and waited for Valladares to commit before tucking the ball home with the side of his boot.

Switzerland remain suspect at centre-half – a weakness which will surely be noted by Argentina, who they will meet on Tuesday in the last 16. Johan Djourou endured a nightmare second half. He was caught out of position three times in the space of 15 minutes after half time, affording Honduras decent opportunities to find a route back into the game. He was very fortunate not to give away a penalty on the hour mark, bringing down Jerry Palacios from behind. Minutes earlier, Jerry Bengtson should have capitalised on more sloppy positioning from the former Arsenal player, missing out with a diving header while the next phase of play saw the Honduras striker’s effort hooked off the line by Ricardo Rodríguez.

The free-flowing attacking play displayed by the Swiss in the opening half went missing for a spell until Shaqiri claimed his hat-trick with 20 minutes remaining. A long ball forward by Rodríguez was picked up by Drmic on the left, who confused Bernárdez with a couple of step-overs to set up the unmarked Shaqiri right in front of the goal. He was never going to miss.

Bengtson was denied a consolation by a decent Diego Benaglio stop as the game entered the final 10 minutes and, with France holding Ecuador to a draw at the Maracanã, Hitzfeld’s team made it through.