You have to bite your lip at times, something Martin O’Neill’s assistant may find difficult 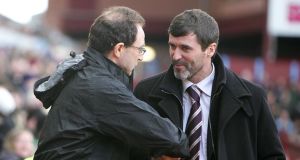 What is the role of a number two? Well, that depends on the number one.

I did it just the once, under Mick Lawlor at Home Farm for two years and six months in Drogheda. That was my stepping stone into the St Pat’s job in 1986 and it proved an invaluable period in my football career.

So much of Ireland’s new double act will, initially at least, focus on the specifics of Roy Keane’s role and how he beds back into life within the Republic of Ireland camp.

Martin O’Neill possibly wanted him on board because of his familiarity with the FAI and Irish set-up. Let me tell you, Roy, it has changed significantly since your retirement in 2005.

Sadly, only the physio Ciarán Murray, the doctors Alan Byrne and John O’Byrne, and Brian McCarthy as video analysts remain.

More the shame is that John Fallon, who was a link to Umbro, has been moved along. Johnny was always very close to Roy. He was an integral part of the back-up team during Mick McCarthy’s time in charge, right through the Steve Staunton era and when I was manager.

Joker in pack
To the untrained eye, Fallon might have seemed like the joker in the pack but he was more sports psychologist than assistant to the kit man. I played with him as a 17-year-old and worked with him in an insurance company. Shrewd man is Johnny Fallon.

Keane recognised as much, using him as a scout in Ireland when he moved into management at Sunderland. Johnny unearthed David Meyler for him. Roy took him to Ipswich and when that ended Johnny went back to being a scout for Spurs.

What I’m saying is there won’t be too many familiar faces when they gather their first squad next week.

Except for the FAI blazers. Almost all these servants of Irish football are still in place. From John Delaney to Michael Cody, Milo Corcoran and so on. Maybe all the old rifts has been mended for the sake of Irish football.

The question now is will O’Neill and Keane have much dealings with them? Maybe that was sorted out in the negotiations. Here’s hoping.

Anyway, life as the assistant manager? First of all, you have to check your ego at the changing room door. You do a lot of staring at the manager’s back too. I know that sounds stupid but it can be hard for someone who craves that role for themselves.

You have to bite your lip at times. I would imagine that will be the most difficult part for Roy. You have to time your moment to speak. Granted, he’s well known for making his mark with some choice words.

Dundalk team
Mick Lawlor was a serious League of Ireland midfielder who played for Shamrock Rovers and was part of the great Dundalk team of the late 1970s and Shelbourne after that. He won five caps for Ireland (He’s the kit manager now for the national team nowadays).

In Lawlor, and I can see Martin O’Neill being similar, I was alongside a manager who sought my opinion on player identification, tactics and team selection. I was also charged with keeping a freshness and efficiency at training, while my opinion at half-time and afterwards was always sought.

I felt we worked excellently together mainly because he allowed me to challenge him without dismissing me out of hand like some bosses are wont to do. As a number two you are not under the same pressure so you can develop a different perspective that can be invaluable.

I learnt a lot about man management, both of players and staff, from Mick.

There is something in that for Roy. Martin’s vast experience can be a natural sponge.

Keane will almost certainly adopt a valuable scouting role. He never ceases to surprise me with his knowledge of Irish players scattered throughout the lower divisions in England and his awareness of League of Ireland clubs is impressive.

I’d say he devours every scrap of information he can find. For certain, that problem, so evident with Giovanni Trapattoni, has been removed.

Imagine an Irish kid getting some words of encouragement from Roy Keane moments after shining in a reserve team game for his club? He’ll be walking on water for weeks after.

Training sessions will be interesting. An idea is formulating already that Roy and O’Neill haven’t done much coaching. That’s ridiculous. Being a club manager may have denied them constant hands-on roles but it’s possible to be just that as an international manager.

Usually a squad gets three full training sessions before a qualifier game. They are about 90 minutes in length. There is 30 minutes warming up, agility exercise and some ball work that can relate to tactical work in part two of the session.

The next half hour is crucial. It’s shape work on the pitch when the O’Neill philosophy will be conveyed to the players.

Ability and form
The last 20 or 30 minutes is a game. That’s also key as the ability and form of the players can be examined as the style of the team is implemented; be it a high-pressing game, a patient passing game or long ball approach.

There also needs to be set-piece work (I liked to do this on the morning of a game after I named the team. It switches fellas on).

Now, I don’t believe for a second that Roy Keane and Martin O’Neill aren’t qualified to take the second and third part of every Irish training session.

Chris Hughton took the warm-up sessions when I was manager. He had a way of lifting morale and usually got a possession game into it as well.

The organisational and tactical stuff is when O’Neill and/or Keane should take over.

Coaching is about so much more than time spent at training but both men have all their badges. To get these requires plenty of on-field work when you are challenged and critiqued by other coaches.

They shouldn’t be standoffish coaches so I’m not so sure O’Neill needs to employ a trainer like Steve Walford. They seem like men willing to get their hands dirty.

One job I would definitely earmark for Keane though is dealing with the FAI on all travel arrangements. The hotels, the car park, the cones, goalkeeping fatigue and a suitable Pacific island getaway . . .