‘[Ronald] Koeman’s opinion is not an issue for me...I couldn’t care less to be honest’ 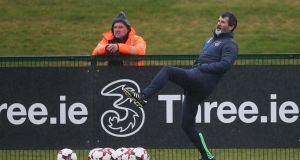 Roy Keane has suggested that Everton should take a look at the way they treat their own players and reflect on the team’s lack of success before criticising Martin O’Neill and the FAI for “overloading” the likes of James McCarthy.

The 25 year-old midfielder is out of the Ireland squad for this Saturday’s game against Austria in Vienna and Keane says he has no problem with that but the former Manchester United star was fairly scathing about the club’s outlook with regard to its international players.

“I’m not sure when the last time Everton won a trophy but it’s a good number of years ago,” the Republic of Ireland’s assistant manager said. “Maybe overloading players and playing a lot of games . . .  maybe that’s a good thing; it means you’re being successful, lads are playing week in week out, playing midweek games but Everton don’t play any European football, they’re out of the League Cup, I think Norwich beat them at Goodison . . . maybe Everton as a club need to, and it’s a brilliant football club, but maybe their players need to toughen up a little bit.

“Clubs are going to be selfish; they are going to look after their own players,” he acknowledged. But they are lucky to have the Irish players that they have there and Everton, traditionally, have always had brilliant Irish lads doing well for the football club so they should not be so quick to stop Irish players coming to play for Ireland.

“I think we’ve had this problem previously with (Roberto) Martinez, I think he was slightly over the top. It’s not a criticism of the players; this is more about Everton and their staff. They were always ‘carrying knocks’. I always felt that the Everton players were going to be on crutches or crawling in the hotel door and now it looks as though we are probably going to have that issue again with (Ronald) Koeman. Hopefully not.”

Asked if O’Neill could do with having a good relationship with Koeman, something that is less likely after the pair’s exchange via the media on the McCarthy issue over the last week or so, Keane insisted that it really doesn’t matter.

“Why would we need a good relationship with Everton,” he asked by way of an answer. “I’ve experience of this myself and I can understand it a little bit but if a player is fit and feels he can travel and play in a game, particularly a qualifying game, then they should get their heads around it.

“Because with James and Seamus, I mean what a player Seamus has been for them so why would they begrudge Ireland having these players available to us. Darron Gibson’s Irish and he’s missed a lot of games; a hell of a lot of games and he seems to get injured a lot at Everton (he also, as it happens, suffered a cruciate injury while playing for Ireland against Kazakhstan in October 2013 that severely disrupted his career) so they maybe they need to take a look at their own training schedule.

“Koeman’s opinion is not an issue for me,” he concluded. “I couldn’t care less to be honest.”

Aside from McCarthy, John O’Shea was amongt those missing as the Irish squad started their build up to the Austria game at Abbotstown. The Sunderland defender, who is due into Dublin on Tuesday evening, stayed on at his club to continue receiving treatment on a hamstring injury and Keane said he is “doing well”.

James McClean’s situation is not quite so clear with the West Brom player sitting the session out with a slight back problem while Eunan O’Kane is nursing a groin strain and Kevin Doyle was allowed to rest after the long journey from Colorado.

Keane said that it was good to see Daryl Horgan and Andy Boyle in with the squad although the pair did only a light session in the wake of Sunday’s cup final.

The FAI, meanwhile, has confirmed that Fifa has asked it to outline its position on the issue of the 1916 commemoration shirts worn against Switzerland in March and given it until November 17th to do so. It said that it will not be making any comment on the matter publicly before then.