Robbie Keane happy to be part of Ireland’s Philadelphia experiment 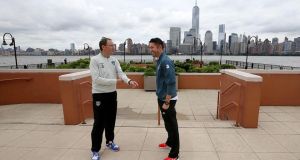 Republic of Ireland manager Martin O’Neill and captain Robbie Keane with Manhattan in the background ahead of the friendly against Costa Rica. Photograph: Donall Farmer/Inpho

The Republic of Ireland squad took the train from Manhattan to Philadelphia yesterday afternoon ahead of tonight’s friendly game against Costa Rica. Robbie Keane joined up with the squad in New York, yesterday celebrating his return from a four-match absence on what was the 12th anniversary of perhaps his most evocative goal, that late, sliding equaliser against Germany in the group stages of the 2002 World Cup.

Heady days, but Keane remains effervescent and central to the Irish cause while Martin O’Neill is tasked with trying to elevate Ireland’s slow fall into 70th place in the Fifa rankings, an all-time low.

“It is funny how stats mount up,” he mused yesterday, after obligingly standing with Keane for a photographers’ session framed by Manhattan’s spires across the river. In chipper form and plainly relieved that the general obsession with the future of Roy Keane seems to have abated, O’Neill challenged the assertion that current friendly results contribute to the rankings assessments and Ireland’s fourth seed placing.

“I don’t want to be pernickety . . . but if that is the case, then over the course of the next two years playing friendly games, I will choose the easiest opposition to play at home. If that helps. That is not how I see it. I am not sure that would be good preparation for the European championships. I have been in the job seven months and we have chosen pretty difficult games. Do I think this is the best preparation ? I do.”

“My own view is that we should have won the three games,” he said of Ireland’s recent matches.

“We missed some great chances against Serbia and Turkey and Italy, I just played the game back last night and definitely, we should have won. So if we can get the level of performance up at this stage accepting the fact that eventually when you step into the European championships, results are the be all and end all.”

Definite starter
O’Neill confirmed that Robbie Keane is the only definite starter against Costa Rica in his mind but Stephen Ward’s withdrawal through injury seems to leave Marc Wilson as the most obvious candidate to fill the left back role. The manager indicated that he will make at least four changes to facilitate starting caps for players who have been with the squad throughout this tour of duty.

One of the most pleasing aspects of the recent series of matches has been the late international blossoming of Wes Hoolahan, whose classy and clever distribution illuminated the play in the match against Turkey. O’Neill was enthusiastic about the idea of Hoolahan operating in the same team as Keane during the forthcoming European campaign.

“Absolutely. Wes played particularly well against Turkey, I thought he was outstanding and got a bit tired against Italy and has done well in those particular matches where he can create things. Robbie has, in his life, done both. Nowadays people would think of Robbie as a goal scorer, a taker of chances but I don’t see any difficulty in the two starting together.

“Whether Wes starts . . . I wouldn’t read anything into that. But in competitive games, I don’t see that being a problem. I don’t exactly see Robbie and Wes as being very similar players. Robbie, let’s be fair, would score umpteen more goals. That’s the nature of it.”

Keane, at 33, has lost none of his enthusiasm for the international game and was thrilled by the resounding success of his decision to undergo Achilles surgery to both legs during the off-season.

“It couldn’t have gone better. The two Achilles operations were done at the same thing. I had a full pre season and haven’t missed a game. I wish I had it done two years ago because it is a huge difference – not just playing but in in general, just waking up in the morning and taking me five seconds to walk to the toilet instead of twenty minutes.”

Keane will hope to mark his return by extending his phenomenal international record of 62.

The Costa Ricans, ranked 28, lost their warm up match against Japan 3-1 in Tampa on Monday evening, with Bryan Ruiz, the team captain, scoring their only goal. Their preparations have been deeply affected by the injury to striker Alvaro Saborio, who has broken his fight foot and Everton defender Bryan Oviedo, who has not recovered from a leg break suffered in January. They are likely to persist with Joel Campbell, the 21 year old Arsenal striker who had an impressive season on loan to Olympiakos, leading their attack.

Costa Rica’s World Cup campaign opens against Uruguay on June 14th, with England and Italy their other opponents in Group D.

“Only what I have seen on DVD from Brian McCarthy,” O’Neill said of the mugging up he has done on the Cost Ricans.

“They are heading into England’s group. They had a game their recently and may change it around but I familiarised myself with their style of play and formations. They went relatively strongly in their last game so may use a few players against us.”

Suffered
The Costa Ricans suffered in the soupy heat of Florida and, like the Irish, will welcome the balmier conditions in Philadelphia. Robbie Keane was withering in his criticism of the MLS after playing for the LA Galaxy in Chicago in a mid-afternoon match played in 32 degrees Celsius and high humidity.

“I wouldn’t be happy about it and think that if this league wants to progress and move forward, it needs to listen to other people,” he cautioned.

“One of our players actually felt dizzy and nearly fainted. One of these days something seriously bad is going to happen. It doesn’t make sense to have a game at three o clock when you can have it at eight o’clock.”