Republic of Ireland require new blood to avoid strike out 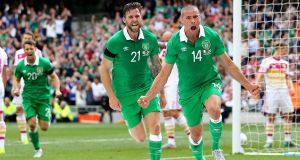 Jon Walters has scored 12 goals in 45 appearances for the Republic of Ireland. Photograph: Cathal Noonan/Inpho.

It was nice the other day to hear Marko Arnautovic lavish praise on his Stoke City team-mate Jon Walters but it will not have been an accident that the 27-year-old Austrian omitted the word “goal” from his line about the Republic of Ireland striker being “a machine”.

With Shane Long ruled out by injury, Walters is almost certain to lead the attack in Vienna on Saturday and Austria’s start to this campaign suggests that the home side’s box can be a happy hunting ground just now.

Ireland, though, have flown to Vienna decidedly short on strikers who can be relied upon to pull the trigger.

The team’s most likely route to goal seems to be via Robbie Brady’s set pieces with Martin O’Neill still anxiously scouring the horizon for the goalscorer required so that the team might pose more of a threat from general play.

Walters’s role will be vital regardless. He battles for the ball heroically and holds it up well, something that will be key against a side that looks to press opponents and disrupt their passing high up the pitch but in terms of actual finishing, Ireland might well look ill-equipped to grab an away goal if their hosts can steady themselves at set-pieces and sort themselves out defensively.

Walters is sure to start and with good reason but since Arnautovic, who scored both goals against Wales last month, landed at Stoke just over three years ago, the 33-year-old has scored 23 goals in 115 games for the club and while it not actually a bad return for a player whose first responsibility is not always to get the ball in the back of the net, it does suggest that finishing is not his forte.

Long would have started in front or alongside him this weekend had he been fit but after having had what was probably the best half season of his Premier League career before the summer, he is struggling in front of goal himself of late and between them the pair have yet to score in a combined 21 club appearances this season.

In the Southampton striker’s absence James McClean is likely to have a more attacking role and his goals in Moldova certainly provided a welcome reminder of the threat he can pose.

Like Walters, though, who got five competitive goals for Ireland in 2015 but just those two against Oman so far this year, McClean has not delivered at all consistently in that department.

Roy Keane acknowledged on Tuesday that it is a side of the player’s game O’Neill is anxious to develop but the Corkman’s suggestion that they have, at this stage in his career, been telling McClean that he needs to get into the box more when the team is attacking down the far flank hardly suggests a predator’s instinct.

The difficulty is that, beyond that, the manager’s options are not great. David McGoldrick prefers a deeper role and while he says he feels comfortable with the notion of playing up front it is several years since he did it with any degree of success at club level.

Adam Rooney, meanwhile, has delivered goals on a regular basis for Aberdeen in the Scottish top flight but just about everything O’Neill has done since arriving into the job has added weight to the suspicion that, when it comes to matchdays, he really only sees himself picking players from England’s top two divisions.

That Robbie Keane was a special case was underlined by the manager’s attitude towards Kevin Doyle’s move to Colorado and having had very few chances to make any sort of mark in an Ireland shirt under the Derry man, Doyle makes this trip hoping that he might somehow score his first competitive international goal in more than four years.

That he is back is no surprise, though. Next up in the pecking order are the likes of Eoin Doyle and Paddy Madden, neither of whom currently looks like en entirely serious option at this level and so O’Neill has left the door open to Brentford’s Scott Hogan when, one suspects, Brian Kerr or Giovanni Trapattoni might well moved on after his reluctance to commit.

After the problems he has had with serious injury, Hogan’s preference for resting up through the international breaks is not all that unreasonable but it certainly makes plain where his priorities lie and from his point of view O’Neill having to hang around for a mid-table Championship striker is slightly embarrassing although he must be getting accustomed to the feeling for the manager has suggested that Joe Mason at Wolves is similarly inclined to kick a potential call-up down the line.

It is, in the circumstances, hard to see how things are going to change any time soon with Seán Maguire, for instance, surely having to establish himself back in England at a decent level before he will be considered a serious option.

Callum O’Dowda acknowledged this week that his move to the Championship has made him a more credible choice out on the wing, something that might, in turn, eventually facilitate McClean playing more up front and centre but the 21-year-old, whose confident outlook is certainly impressive, may take some time to fully adapt after jumping up two divisions at club level and, despite getting on in Moldova, still looks to be some way off being a major player for Ireland.

In the meantime, as McGoldrick admits when asked about Robbie Keane’s departure: “People have to step up to the plate and score”. Beyond that, though, O’Neill really needs somebody, somewhere to step out of the shadows.