Poor officiating the talking point yet again in Group A 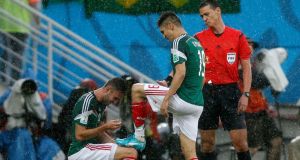 Mexico’s Miguel Layun pretends to tie the shoelaces of team-mate Oribe Peralta after he scored his side’s goal in the Group A game against Cameroon at Dunas Arena in Natal. Photograph: Toru Hanai/Reuters

Mexico 1 Cameroon 0: This was the second game of the World Cup and for the second game all the talk after the final whistle was about the referees. The main difference between this game and the opener between Croatia and Brazil less than 24 hours before, however, was that the decisions, in the end, did not influence the result.

The result carried Mexico into second place in Group A, level on points with Brazil, and also, probably, saved Fifa’s blushes. Oribe Peralta’s goal came just after the hour mark, capping an impressive performance from a Mexican side that dominated from the start.

The decisive move started out wide before the ball was moved inside. After a smart move, Giovani Dos Santos found himself inside the area and unleashed a shot which the Cameroon goalkeeper Charles Itandje could only parry. Peralta was lurking for the rebound and a struggling Cameroon defence could not recover in time to keep his shot out.

It was no more than Mexico deserved as they had controlled the game throughout. And twice they were denied by the Colombian officials, both times for offside, both times erroneously.

Former Tottenham player Dos Santos was at the heart of both those “goals”, first slamming a fine volley past Itandje after just 11 minutes, only to see the assistant rule that he had been offside when, in fact, he had been clearly onside. Then the Villarreal striker had the ball in the net again on the half-hour mark from Miguel Layún’s corner, only to collapse in frustration when the assistant again waved his flag.

The first decision was poor; the second was dreadful and got worse the more times you watched it: replays showed that not only had Dos Santos been onside, but Cameroon’s Eric Maxim Choupo-Moting had flicked the ball on to set up the chance.

The Mexico coach, Miguel Herrera, looked incredulous on the touchline but he will have been pleased by the energy, the organisation and the quality that allowed El Tri to collect three critical points and place the side in a good position ahead of a difficult second match against Brazil in Fortaleza on Tuesday.

Cameroon, largely outplayed in the first half, did spurn a gilt-edged chance of their own. Benoît Assou-Ekotto raced around the Mexican backline in the 22nd minute to deliver a superb ball into Samuel Eto’o, only to see the striker volley his shot agonisingly wide of Guillermo Ochoa’s near post. Assou-Ekotto also saw a free-kick deflected narrowly wide in the second half, but it was largely a toothless performance from the African side.

Volker Finke side attempted to snatch a point very late on, and threw Pierre Webo on for Alex Song, and they did create some late chances. Benjamin Moukandjo sent in a tasty cross that forced Francisco Rodríguez to clear; then delivered a header in stoppage time that Ochoa saved well. Those chances were not enough to atone for a poor overall display or to prevent El Tri from collecting a deserved victory at the final whistle.

Herrera, meanwhile, did make a substitution with the Manchester United striker Javier Hernández replacing the goalscorer Peralta with 16 minutes remaining. Soon afterwards Mexico, who endured a poor qualifying tournament and nearly missed out on the tournament, nearly won a penalty but the rash challenge of Dany Nounkeu on Marco Fabián was just outside the area. The resulting free-kick, from Dos Santos, came to nothing.

Mexico displayed some nerves towards the end but the three central defenders, Rafael Márquez, Moreno and Miguel Layún, stood firm. On this evidence, Cameroon will struggle to get out of the group while the final group game between Mexico and Croatia on June 23rd may well decide who progresses with the favourites, Brazil.

1 Rory McIlroy puts integrity ahead of glory in US PGA second round
2 Bayern Munich complete formalities with rout over Chelsea
3 Lionel Messi waves his magic wand again to guide Barça past Napoli
4 Sene Naoupu turning mind back to rugby after health scare
5 Wolves found in breach of financial fair play rules by Uefa
Real news has value SUBSCRIBE
Crossword Get access to over 6,000 interactive crosswords