Moment of truth as Brazil gets ready for kick off 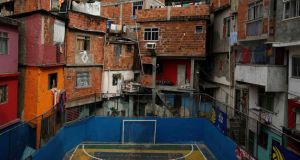 You don’t have to go very far to find a five-a-side pitch among the many favelas in Rio de Janeiro, like this one at the Tavares Bastos slums. Photograph: Pilar Olivares/Reuters

Ten years after it launched its candidacy Brazil’s moment of truth has finally arrived with the kick-off tonight of one of the most controversial World Cups in decades.

Brazil face Croatia in the opening game in São Paulo as the football finally gets underway after a build-up soured by stadium delays, cost overruns, mass demonstrations against the tournament and sniping between the host country and Fifa.

Brazil’s authorities will be hoping that the country’s attention will now switch to the action on the field rather than their failure to deliver new infrastructure projects as part of a promised World Cup legacy, a major cause of discontent.

In an unusually impassioned televised address Tuesday night president Dilma Rousseff said the country was now ready for the event. She acknowledged that organising the competition was like “a hard-fought game” but that “the result and final celebration are worth the effort” and that tournament “pessimists” had been defeated.

But public enthusiasm in Brazil’s biggest city has been slow to build, despite it hosting the opening match. Just over 100 fans turned out to welcome Brazil’s squad to its hotel late on a cold, wet Tuesday night after it arrived from the team’s training camp near Rio de Janeiro.

The first foreign fans arriving in São Paulo said they are excited about the month’s football but complained about the shortage of taxis at the international airport, the city’s chaotic traffic and long lines for retrieving tickets at Fifa distribution points.

The setting for the opening match – the new Corinthians Arena in Itaquera, a poor suburb in the east of the city – symbolises many of the problems Brazil has faced in getting infrastructure ready for the tournament.

Construction on the Itaquerão, as it is locally known, only started in 2011, four years after Brazil was formally chosen to host the event due to feuding between Brazilian football authorities on where to stage games in the city.

It will only receive its first capacity crowd today after delays completing it forced organisers to reduce the gate at two test games. A temporary scaffold for almost 10,000 spectators behind one of the goals installed especially for the tournament has never been used before.

Local fire department inspectors finally issued a safety certificate for the venue on Monday night but its capacity has been reduced to 61,600 from the originally planned 68,000, leaving it 3,400 below the 65,000 demanded by Fifa for the opening game.

Foreign media arriving at the ground earlier this week to collect their press passes were busy filming teams of builders rushing to complete works on the area surrounding the stadium. Its roofing remains unfinished and will only be completed after the tournament ends.

President Rousseff will attend the opening ceremony but has abandoned plans to give a welcoming speech in order to avoid a repeat of last year when she was loudly booed when attempting to address the crowd at the opening of the Confederations Cup, the dress rehearsal event for the World Cup.

It was the latest evidence of the strained relations between the Brazilian government and Fifa who fell out over the chaotic preparations.

Demonstrations to mark the start of the tournament are planned in at least seven of the 12 host cities, including São Paulo. But despite opinion polls showing 60 per cent of Brazilians believe hosting the tournament is bad for Brazil, protests in recent weeks have failed to mobilise the huge numbers that took to the streets during last year’s Confederations Cup.

In São Paulo the coalition of groups opposing the event looks to have lost the support of one of its largest components after the city’s well-organised homeless movement said it would suspend its protests.

The decision comes after authorities caved into its demands and promised to finance the building of 2,000 new homes for families that had invaded a site owned by a construction company near the stadium holding the opening match.

The threat to public transport has also receded as the city’s metro workers suspended their strike on Monday after a labour court ruled it illegal. But they are threatening renewed industrial action if 42 workers fired for vandalism during the stoppage are not reinstated.

Should the strike restart the metro’s operator is planning to prioritise the line that links the stadium to the centre of the city in order to minimise the impact on fans.