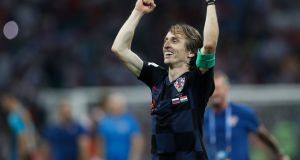 Croatia’s midfielder Luka Modric celebrates after the victory on penalties over Russia in the World Cup quarter-final at the Fisht Stadium in Sochi. Photograph: Adrian Dennis/AFP/Getty

When Luka Modric moved to Tottenham Hotspur in 2008 England had endured a summer without tournament football, having missed out on the European Championships. The Croatia midfielder would spend four seasons at White Hart Lane and it was a period in which he had a close-up view of the travails of the England team; the angst, anger and division that characterised the feel of it.

England would qualify for the 2010 World Cup and Euro 2012 but there was little to write home about from either.

They flopped at the former, with one of the low points being Wayne Rooney’s on-camera critique of the jeering travelling support after the group stage draw with Algeria, while they went into their shells at the latter to exit on penalties to Italy.

Modric remembers all of the stuff about the disconnect between the nation and the squad; how managing England was the Impossible Job. It would remain the case after his transfer to Real Madrid. As he racked up the titles, including one Champions League after the other, England continued to resemble a stuck record.

What worries Modric and the rest of Croatia, as they prepare for the World Cup semi-final against England in Moscow on Wednesday, is their opponents’ new-found unity. Quite simply, it is not supposed to be this way but, listening to Modric and other members of the Croatia set-up after their penalty shoot-out victory against Russia in the quarter final on Saturday night, it was plain that Gareth Southgate’s work has left them wary.

“They are looking strong as a team,” Modric said. “I don’t know if there is a different mentality but it seems that they are more like a team. They have this togetherness that is very important to have success.”

Davor Suker, the former Croatia striker, who is now the president of the country’s football federation, echoed Modric’s sentiments.

“What I would like is to face the England team of before but now they are very strong and we have to respect them,” Suker said. “It is not money that will play – or Ferraris or watches. It will be 11 warriors against 11.”

Modric played with the England defenders Kyle Walker and Danny Rose at Tottenham while he remembers the baby steps of Harry Kane into the professional game. Kane played a clutch of Europa League ties at the beginning of the 2011-12 season, including one – a 2-1 home defeat against PAOK Salonika – in which he and Modric started.

“Harry was young and just coming up,” Modric said. “He was always a hard worker. I actually remember one story about him but I will keep it to myself.”

That little tease drew a predictable reaction from the journalists in attendance but Modric was more forthcoming about a couple of matters that stand to shape the semi final – England’s set-piece prowess and the respective levels of fatigue.

Modric and his team-mates watched England’s 2-0 regulation time win over Sweden in the quarter-final earlier on Saturday and they noted how Harry Maguire’s headed opener from a corner had shaped the occasion. Corners or free-kicks have led to seven goals for England in the tournament.

Croatia suffered a damaging lapse on a Russia free-kick deep into extra time, which enabled Mario Fernandes to head the equaliser. They have conceded only three goals at the finals and one of the others came when they failed to defend a long throw into the box during the last-16 penalty shoot-out victory against Denmark.

“They have players like Maguire, Harry Kane and [John] Stones, who are strong and they are scoring so much on set pieces. We are going to have to pay attention to those details because we conceded from one against Russia that we shouldn’t have allowed.”

Some of the Croatia players looked out on their feet during extra-time against Russia and bodies have started to buckle. Goalkeeper Danijel Subasic had carried a hamstring problem into the game, which he would feel at the end of normal time only to play on after treatment, while right back Sime Vrsaljko was forced off in extra-time with a knee injury.

“England have suffered less than us,” said Modric. “And we have fewer days to recover for the semi-final than we did for the quarter-final. But it’s a semi-final. We will find the extra motivation, the extra everything.”

Modric was excellent against Russia, his influence growing in the second half after Zlatko Dalic introduced the defensive midfielder, Marcelo Brozovic. Previously, Modric and Ivan Rakitic had played in the centre of a 4-2-3-1 formation; now, they were released further forward, either side of Brozovic, in a 4-3-3. Modric has consistently looked better when he has played higher up the pitch and it is plain that one of England’s major challenges will be to nullify him.

What has shone through from the Croatia camp is how much relish there is for the meeting with England. The belief is that, unlike Denmark, in particular, and Russia, Southgate’s team will try to make the game and will play on the front foot.

“We like to play against teams like England because we have fast players and it will be open,” said Vedran Corluka, the former Manchester City and Tottenham defender, said.

“We both want to have the possession, we want to win. England’s style is a bit like Manchester City’s, especially with Stones who is always on the ball. Hopefully it will be like Wembley in 2007, when we won 3-2!”