Mick McCarthy was ‘never going to turn down’ Ireland job 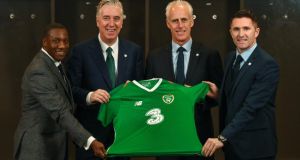 Mick McCarthy says he had no hesitation about accepting the Republic of Ireland job despite the fact that it is for one campaign only. “We’ll see whether it’s a good decision, won’t we,” he said with a smile at his official unveiling in the Aviva stadium this afternoon, “when he know whether we have qualified for the European Championships in two years time but I’m looking forward to it. I was never ever going to turn it down.”

McCarthy said that the FAI’s plan to bring Stephen Kenny into the role in two year’s time was made abundantly clear to him from the very outset and that he quickly came around to the idea that he would take the job if that was the basis on which he might get it. He admitted that he might well regret having to go when the time comes but the bottom line, he said, was that he was being offered almost two years in a job that he desperately wanted to do again.

“I probably won’t,” he said, “but that’s two years down the line. Do you have any idea how long an average Championship manager gets? Eleven months. I’m getting more than twice that.

“When we get to the final of the European Championships,” he joked, when asked what would happen if things went particularly well, “there might be a bit of a push for me to stay but then there might a job for me somewhere in the Premier League too.”

He does not, he says, know Kenny at all well – they have only spoken a few times but the two are to meet this evening – but paid tribute to the Dubliner’s achievements over the last few seasons at Oriel Park. “No disrespect to Dundalk but I’m so surprised that he hasn’t gone somewhere else already.

“If he comes in and rips it up with the under-21s maybe somebody will; who knows what will happen? But I’ll be working with the senior team with Terry (Connor) and Robbie (Keane). Stephen will hopefully be shoving players through from the 21s.

“I hope that I leave a team behind that’s qualified and in good shape and that he can go on then and get it qualified for the World Cup.”

Connor comes in as McCarthy’s assistant but Keane has also been given that title and the 59 year-old said he was happy to have a younger mind and voice as part of the management team. “I gave it some thought and I kind of like the idea of a younger coach with some bright ideas. I think he will have an affinity with the players.”

He would, he said, speak to a good many of them over the coming weeks but admitted that the future of Declan Rice is a particular priority. McCarthy has already spoken to the player’s father, Seán, and said that he would be following up by sitting down with both of them next month.

“I’m going to go and speak to him in December,” he said, “when his father around. I’m going to sit down and speak with them both.”

John Delaney said he was “absolutely delighted,” to have McCarthy back. The association’s chief executive said that they had been talking to Kenny about the under-21 role for a while and heard in detail about his interest in the senior job, they had decided on the plan to having him take over in 2020.

1 McDunphy stuns Roche to take gold at National Road Race Championships
2 Leo Cullen: ‘It feels like it all came crashing down on top of us’
3 Champions League draw: Manchester United handed tough draw on return
4 Dave Hannigan: How Christy Ring aroused the curiosity of American media
5 When Down’s 1960 All-Ireland victory brought down barriers
Real news has value SUBSCRIBE
Crossword Get access to over 6,000 interactive crosswords