Rioting broke out in the streets of Buenos Aires after the second leg of the Copa Libertadores final between River Plate and Boca Juniors was delayed on Saturday (November 24). The match was delayed after Bocas team bus was attacked. 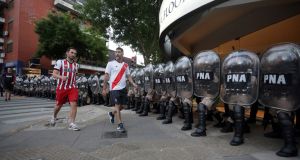 They are seductive, those images, those snapshots of a place where the colours shine brighter, the noise rings louder.

It is all so vibrant, so alive, so enticing that it is irresistible – the sight of tens of thousands of fans mounting a pilgrimage just to see their team train; the sound of 70,000 in full voice, basking in glorious sunshine, hours before a game; the smell of the cordite, the smoke of the flares.

But what makes the scene so mesmerising – at least to the weary eyes of a European, or a North American, resigned to the corporatisation of sport – is the sense that this is something that we have lost, or that this is how it should be.

Those images are true, of course: Argentine soccer is vivid, pulsating with life in a way that, certainly in Europe, seems to have been condemned to the past. The stadiums shake with the noise, and the country with the fever of its obsession.

It is true that Buenos Aires has been waiting with bated breath for a game it views as the most important in its history, the second leg of the Copa Libertadores final between River Plate and Boca Juniors, this city’s, this country’s and this continent’s two biggest clubs.

It is true that so many fans went to watch Boca train on Thursday that the city council – angered that they had exceeded the stadium’s capacity – decided to close it. It is true that almost as many went to La Boca again on Saturday to wave their team off.

And it is true that this felt unique: the first time the two sides of the so-called Superclásico had met in the most significant match in the South American calendar. It was the Final to End All Finals, the Final for All Time, the Finalissimo.

But all of that is only part of reality. There is another side, one that is off-putting rather than seductive. It is not unique to Argentina, not at all, but few countries struggle with it to such an extent.

The trouble is not a direct consequence of those things that make Argentine soccer so appealing, but it is a result of allowing them to slip from control, to let them be used as justification for anything. And, to Argentina, it is a source of shame that on Saturday evening, it showed that side to the world.

As Boca Juniors’ bus approached the Estadio Monumental a couple of hours before kick-off, it turned down Avenida Monroe, a well-known gathering spot for River fans before games and not, as a rule, the route a visiting team would take. It was travelling quickly, flanked by police outriders.

Footage from inside the Boca Juniors bus as it was attacked by River Plate fans on the way into El Monumental #CopaLibertadores #Superfinal pic.twitter.com/Mas082mTW0

But as it slowed to turn a corner, the bus was confronted by hundreds of River fans. They threw stones, sticks and bottles. The windows shattered. The driver fainted. A Boca vice president, Horacio Paolini, had to take the wheel. The police, according to several reports, fired pepper spray to disperse the crowd. It drifted inside the bus.

A few moments later, Boca arrived at the stadium, its players coughing, retching, their throats burning from the gas. Shards of glass had hit two players, Pablo Pérez and Gonzalo Lamardo, in the eye. Others had been cut by the debris. “We had come to play a game, and we found a completely different situation,” said Marcelo London, a Boca official.

Boca immediately requested that the game be cancelled, or postponed. Conmebol, the competition organiser, demurred. It had a commitment to its broadcaster, Fox Sports. The Argentine government, with a summit meeting of the G20 to start in Buenos Aires this week, wanted this fixture out of the way.

The game was delayed once, then twice, then a third time. Viewers around the world waited, left in the dark as to what was happening. Outside, fans without tickets broke down barriers and battled with police to get inside. Pérez and Lamardo were taken to the hospital for treatment; they were assessed, too, by Conmebol’s own medical staff, who determined that their injuries were insufficient to warrant a cancellation.

They were told to play, with an implicit threat that the club would forfeit the game if it refused.

Even the intervention of Marcelo Gallardo, the River manager, was insufficient. He had told Conmebol that if Boca did not want to play, then neither did River. The organisation stood firm.

“They’re forcing us: The truth is, we are not in a condition to play,” said Carlos Tevez, the Boca striker. “We are waiting.”

They waited until just before 7.45pm in Buenos Aires, the last suggested kickoff time. River’s coaching staff had laid out cones on the field, ready for the warm-up. Fans had started singing again.

Then, at last, Conmebol made the announcement. The game was off, postponed until Sunday at 5pm (8pm Irish time). A few hours later, the Buenos Aires council confirmed that it had closed the Monumental. As of Saturday night, it was not entirely clear where – or whether – the game would be played.

The fans whistled at the decision. As they left, some fought running battles with the police.

It would be easy to suggest that all of the hyperbole in the build-up to the game had almost guaranteed that this would happen. Passion had been pushed to a breaking point. This was the result of all of the talk, all of the hysteria, around the Final to End All Finals.

And yet that is not real, either, or not all of reality. On Wednesday, All Boys, a second division team in the Floresta neighbourhood of Buenos Aires, lost its own clásico, against Atlanta, on a late goal. Its fans rioted, threatening Atlanta players on the field and fighting the police outside the stadium. River’s meeting with Boca in the final of the Copa Libertadores might be unique, but the poison that devoured it is not.

It has happened all too often here, of course; it is why so many dreaded this game, even as they shivered in anticipation of it.

“This country is not ready for a Boca-River final,” the journalist Andres Burgo said, before the first leg, which ended in a 2-2 draw. They are used to it, resigned to it, imprisoned by it.

The difference, on Saturday, was the scale of the audience. For once, Argentina felt the world was watching. “Another opportunity lost in front of the whole planet,” Gabriel Batistuta, the former Argentina striker, wrote on Twitter. “Shameful. Lamentable.”

This is the reality of Argentine soccer. The colour, the noise, that stirring sense of the epic: All of that is real. But it does not exist in isolation. Left unchecked – or more than that, indulged – it stops being a sign of something that is intensely alive. It starts to symbolise something that is being allowed to die. - New York Times