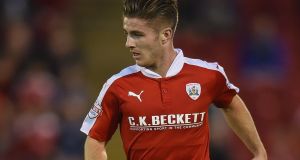 Barnsley’s Dan Crowley in action during the Capital One Cup clash against Everton at Oakwell Stadium. Photo: Michael Regan/Getty Images

The never-ending search for tomorrow leads to a car park in Doncaster. Outside the Keepmoat Stadium, home of Doncaster Rovers, a tracksuited teenager is on his phone, pacing around, taut, energy largely unspent. Temporary team-mates are gathering.

Beside them the bus is getting ready to go. It will take Barnsley FC’s beaten players back to Oakwell, 15 miles or so away.

It was the tenth time they had seen Crowley in a Barnsley jersey. The first was in August, three days after Crowley’s 18th birthday. He had just arrived on loan from Arsenal. The 18-year-old lasted 57 minutes that day; here he was on the bench. Yet the noise around the young man has only grown.

You could blame Jack Grealish. It is the way of these things and it is possibly unhelpful and possibly unfair but once Grealish decided the outcome of his Irish-English tug-of-war, the eyes moved on to the next one on the radar.

And that, for now, is Crowley.

There are similarities. Like Grealish, Crowley is a nimble ball-playing number 10 with a body swerve.

As we have seen with Grealish, though, what is done as a teenager need not determine senior choices.

Crowley had not been aware of this in Doncaster. Then when he was asked about his international future, he said: “I’m just concentrating on my football at Barnsley to be honest. I need to get back in this team, that’s what I’m concentrating on.”

An international decision has not been made then?

“Well, yeah. I’m just concentrating on my football at Barnsley.”

The subject returned to Arsenal.

“They just want me to get game-time and play men’s football,” Crowley said.

It was with this remark that his age, inexperience and physical development resurfaced as the priority. In old money, Crowley is built like a twig. Ten weeks ago he was a 17-year-old.

In England, as in Ireland, there is heightened awareness of the scarcity of young talent but there is something vaguely uncomfortable about this chase for boys playing “men’s football”.

Thus, even while on loan at Barnsley, long before he may ever be established at Arsenal, there is a desire to know Crowley’s international intentions.

Yet that desire is understandable, too, especially when you see Crowley play. A two-word description would be: “Very Arsenal”.

Likened to Jack Wilshere since moving south to London two years ago, even in last Saturday’s cameo you could see why. As soon as he entered the fray, Crowley demanded the ball. Here was an 18-year-old substitute cajoling older team-mates.

Another young man is Barnsley’s manager.

Lee Johnson is 34 and was once a budding Arsenal teenage midfielder. He ended up, worth noting, playing the bulk of his career at Yeovil Town and Bristol City.

Johnson spoke with poise about a game he had just lost and did the same further down the corridor when Crowley became the topic. Except Johnson was also prepared to be adventurous in his language.

“I think he can develop into anything he wants,” he said of Crowley. “He’s a fantastic talent, got great technique, acceleration, he’s got a real desire to be the best.

“I think he’s naturally mature but he’s only just turned 18, so he needs time to grow – with his decision-making – not just in terms of age. But if his attitude is good, then the world’s his oyster.”

But there was also a warning. And it might apply to all showing this level of interest in players so young and inexperienced. David Bentley sprang to mind.

“He’s come in and it’s the ‘Dan Crowley Show’,” Johnson said. “It’s important he just gets the balance between ego and confidence. Sometimes it crosses the line – both ways.

“When he’s confident and doing his job for the team, then he can certainly be an international. If the ego sets in, which it does at times, then he’s nowhere near as good.

“It’s a fine line but he’s got real talent, a bit of genius in his boots. I suppose with those type of mavericks, that’s what you’ve got to manage. It’s up to him to mature and get the balance right.”

Whether Dan Crowley ends up wearing green or white, let’s hope he keeps his balance.

1 Owen Doyle: Creeping professionalism of schools rugby a threat to the game
2 Caroline Wozniacki’s career ends with defeat to Ons Jabeur
3 Niall Quinn happy to step into the breach at FAI
4 GAA officials and referees brace themselves as new rules kick in, and this time it's for real
5 Scotland’s Finn Russell missed training after Sunday drinking session
Real news has value SUBSCRIBE
Crossword Get access to over 6,000 interactive crosswords