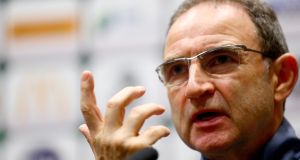 Republic of Ireland manager Martin O’Neill: “I think this would probably be the last hurrah for some of the players.” Photograph: Donall Farmer/Inpho

Republic of Ireland manager Martin O’Neill has said that anything up to half of the places in his 23-strong squad for the Euro 2016 are up for grabs with those playing regularly for their clubs in the lead-up to the summer likely to have an edge over their rivals when it comes time to make his final decisions.

“I’ve got to pick 23 players and we’ve a couple of games coming up in March which I’m going to use as – experimentation may be kind of too strong – but certainly to bring in players who’ve been in and around the scene for a while but maybe not played too much,” O’Neill said, speaking at the announcement of a €5 million expansion at FAI sponsor Celtic Pure’s bottling plant in Monaghan.

“There will be a group of players – I think all of us in this room could pick 10, maybe 12 – that we all agree would be there, injury apart. But there are definitely places up for grabs. It’s something I would genuinely have to consider.

“Sometimes at the start of season you go in with one or two players who maybe haven’t played too much – I’ve done that with Stephen Ward and other players. But I would say that if there are decisions to be made and if it’s close, I think the person who has played more often or who is much, much fitter would stand a better chance of being selected.”

A number of players who didn’t feature in any of the qualifiers have still done enough at club level this season to be considered serious challengers for places in the final travelling party, however, with the likes of Rob Elliot, Harry Arter and Alan Judge among the most obvious contenders.

For them to make it, O’Neill is going to have to cut some of those who have featured with at least one of the three goalkeepers looking vulnerable as well as players such as Darron Gibson, Kevin Doyle and even Marc Wilson.

Gibson, who has made the bench for Everton just once since the transfer window shut, looks unlikely to see much club action between now and the summer while Elliot’s form at Newcastle may well force O’Neill to make a call between his established goalkeepers, none of whom is a first choice with his club.

David Forde looks be under the greatest threat although, assuming Darren Randolph is now Ireland’s first choice, Shay Given can hardly feel guaranteed of his place. Keiren Westwood’s prospects of displacing someone would look stronger, if he had made more than four of O’Neill’s matchday squads in the qualifying campaign.

In all, 11 players, including Alex Pearce, Anthony Stokes and Paul McShane, made the bench for at least one qualifying game and none will have given up hope of making the team.

“I think this would probably be the last hurrah for some of the players,” he said. “They’ve got to the stage now where they’ve had a big, big effort. I’m sure that they possibly thought that after Poland way back four years ago that that might have been their last shot. Here, now, they’ve got another shot at it and it’s great to see that they’ve put their heart and soul into it but there’s a group of players there getting on a bit.

“But I wouldn’t rule someone of that ilk out at this minute and in fact there’s a possibility that for one of the two games I would bring someone like that in to the squad, at least to have them around and maybe even participate in one of the games.

“I think in September time you’d like to have some players ready and by ready I mean they won’t have the experience but they would be ready to go and play international football and try to get a result immediately. Those are things that are pretty important.”

O’Neill’s own contract expires before then but he says he does not foresee any great obstacle to reaching a new deal.