Martin O'Neill's fate had been decided before Denmark game 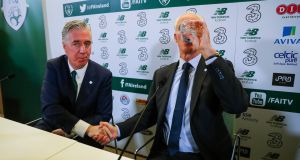 The process that led to Sunday’s announcement of Mick McCarthy and Stephen Kenny as the new and next Republic of Ireland managers started in earnest last Sunday when a firm decision was made that Martin O’Neill and Roy Keane had reached the end of their road, regardless of what happened in Aarhus, Denmark.

FAI chief executive John Delaney confirmed at McCarthy’s unveiling in the Aviva Stadium that O’Neill had taken charge of the team for the Denmark game unaware that his fate had already been sealed. It took until Tuesday morning to tell the 66-year-old the bad news and that evening to tie down the details of his departure. It was only after that that attention turned to recruiting successors, both of whom were already being linked with the job.

“We were relegated from the Nations League technically on the Friday night, so the board took the decision,” he said. “They had a great five years [but] it was a tough last 12 months, no doubt about that,” said Delaney. “I think Martin would accept that the football was poor enough recently, and the attendances were also dropping. That’s a concern.

“You want to see progression in the team, but Martin then would be the first to say that he tried 12 or 13 new players which I hope, which I’m sure, will stand to Mick and Stephen into the future.”

Kenny, he confirmed, had been offered the under-21 job while O’Neill was still in place. The Dubliner had declined it at that stage on the basis that it was not, in and of itself, big enough to entice him into leaving Dundalk where there was the prospect of another crack at the European competitions next summer.

The suggestion had been made in their talks, it seems, that if he came, worked with the under-21s and did well then he would be well placed to be favourably considered for the senior role whenever it next came up but that had not been enough for him. Now they went back, floating a rather more attractive option.

McCarthy would be offered the job for one campaign and Kenny could use that time to broaden his experience and get a far greater sense of international football. When Ireland’s involvement in the European Championships is ended, whether it is before or during the tournament itself, the 47-year-old would make the step up.

Delaney sounded a little like Theresa May with her “strong and stable” mantra during that dismal last general election campaign as he repeatedly referred to the “vision” involved, but for an association generally routinely criticised for being backward, blinkered or, at best, shortsighted it does ultimately seem like a forward looking move intended to help a talented and popular young manager, dedicated to the playing of progressive football, better equip himself to lead the Irish team into a brighter future.

Kenny, mind you, is pencilled in for just one campaign as things stand, the one in which the Ireland will be trying to get to the World Cup in Qatar.

“It shows the pathway, it shows the vision,” said Delaney, not for the first or last time. “When Stephen comes in for the 21s, he should have the right to know he will be the senior manager. So he has two years to learn the bits and pieces he needs to do about international football.

“Mick has come in knowing it’s a project, and the sole project is to get to the Euros. That’s two years. That’s not an inconsiderable time in football, and it’s also a major project to do. Get us to the Euros and then Stephen comes in in 2020 and takes it over having got himself immersed in international football, managing the 21, working with all the underage players and learning about international football, from Mick especially.

“It makes sense,” he continued. “The senior manager is coming in to get us to the Euros. He wants it, he’s driven for it, and he has proven he can work with younger players. He got us there before, all those great things that Mick has done.

“There is no threat from Stephen to Mick, they are going to get on very well, I have absolutely no doubt about that. On top of that, Stephen can use that period to say, ‘you know what, I am going to prepare myself to manage the senior international team’. It’s a good plan, a good vision.”

Delaney denied absolutely that there is wriggle room built into the plan. There is no option for McCarthy, he stated emphatically, to stay on beyond his two years, and no doubt about who his successor will be.

He denied that fans could have been told in an Irish bar before the game in Aarhus, as several claimed the next morning they were, that O’Neill would be gone the next day, although his account of the manager’s departure explained how it would actually have been entirely possible.

He also suggested that the FAI had had nothing to do with the seizure of a banner by Danish security calling for his resignation when, it seems, it must have really.

Around 20,000 people have now signed the online petition calling for him to go. He might just have won over a few waverers, though, with the way he has played this one.