Luis Suarez: no stranger to controversy 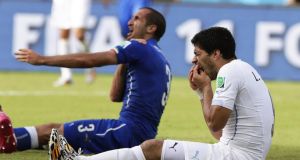 Italy’s Giorgio Chiellini claims he was bitten by Uruguay’s Luis Suarez as the striker holds his teeth at the Estadio Arena das Dunas in Natal. Photograph: EPA 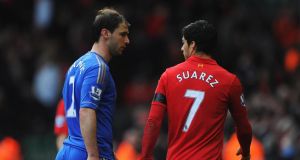 Suarez also clashed with Branislav Ivanovic of Chelsea during a Premier League match in April 2013. Photo by Michael Regan/Getty Images

Luis Suarez has found himself at the centre of another biting storm after a clash with Giorgio Chiellini in Uruguay’s World Cup clash with Italy.

With the Liverpool striker no stranger to controversy, here are some of his previous misdemeanours.

November 2007: Joins Ajax from Uruguayan side Nacional but he is later suspended by the Dutch giants after a half-time dressing-room altercation with team-mate Albert Luque.

July 2010: During the 2010 World Cup quarter-finals, Suarez prevents Ghana’s Dominic Adiyiah from scoring in the final minute with a deliberate handball on the line and is subsequently sent off. A penalty was awarded but missed by Asamoah Gyan and footage showed Suarez celebrating on the sidelines. Uruguay eventually went through to the last four on penalties.

November 2010: Handed a seven-match ban by the Dutch FA and fined by his club for biting PSV Eindhoven midfielder Otman Bakkal during an Eredivisie match.

February 2012: United and Liverpool met again at Old Trafford, but more controversy blew up as Suarez refuses to shake Evra’s hand before kick-off.

October 2012: Celebrates a goal against Everton by diving in front of Toffees boss David Moyes, who had earlier claimed that ”divers” such as Suarez were putting fans off the English game.

April 2013: Bites Branislav Ivanovic on the arm but escapes punishment on the pitch as the referee fails to see it, and scores Liverpool’s equaliser seven minutes into stoppage time as they draw 2-2 with Chelsea at Anfield. Fined by club the following day and charged with violent conduct by the FA. Subsequently handed a 10-match ban by an independent regulatory commission, which Liverpool opt not to appeal against.

June 2014: Television replays show Suarez moving his head towards Chiellini, who responded by swinging an arm before chasing the referee to apparently insist he had been bitten on his shoulder.