Luis Suarez leaves no gnawing doubts as to his intentions 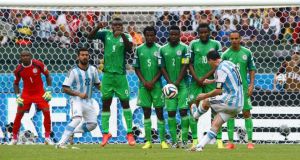 According to Ewe & Eye (the Standard & Poor’s of sport spectatorship), the complete tournament requires there be at least one triple ‘X’ rated fixture of few goals, hard tackling, and an ultimate act of violence.

Yesterday, Luis Suarez punctured any gnawing doubts regarding Brazil 2014’s credentials to be considered among the very best World Cups.

Captain Diego Godin put Uruguay through against Italy but, outside that 81st minute header, this duel offered a plunder of meaty fare. What kind of decisions does Suarez make at all at all?

Shocking. I mean, given the choice of any member of the Italian squad to chew so as to absorb their essence via my canines, a certain bearded vineyard-owner who ambles about for Juve most of the year would more tickle my fancy. Start at the top, like.

Mentioning vineyards, I’m on a few cartons of cut-price retsina this evening in honour of Greece’s injury time win over Ivory Coast. To paraphrase Churchill, Greeks don’t drink like heroes, heroes drink like Greeks. After yesterday’s exploits, I imagine I have some catching up to do.

Twenty years ago today, Nigeria met Argentina for the first time in the group stage of USA ’94. But for an Iranian victory over Bosnia, Nigeria are qualified win lose or draw, although a point in Porto Allegre would ensure passage.

Argentina’s situation is more, and far less, abstract: a win or draw to guarantee the group, fine, but—most importantly— a performance! From the stuttering Bosnia win to being frozen out for over ninety minutes against Iran, Sabella’s boys need a bullocking display to soothe their detractors.

A half bookended with goals, Messi sent the albiceleste two-one up with a free-kick at the death, an otherworldly swish beyond Enyeama. Two strikes in the opening three minutes threatened a barn-burner which only ever managed to smoulder. Messi blasted in a third minute rebound before Musa curled past Romero to equalise within ninety seconds.

That is until Lionel’s late (latest) moment of near divinity, the football generally encouraged, a return to open-ended normalcy after Group D’s snaggle-toothed finale, which vibrant Colombia and irrepressible Greece weren’t able to fully remedy yesterday evening.

Withdrawn on the hour, Messi remained the spectacle’s focal point, Jaime Beglinho chortling with Esteban Alkinho as the director alighted time and again on the Barcelona player amongst bench colleagues.

Celebrating his 27th favourite son partied hard in southern Brazil. A hat-trick didn’t quite arrive but Argentina’s verve with him in their midst was undeniable.

An M & M game, Nigerian scorer Musa nearly capped a fine display with a third of his own, there but for a once-stung Zabaleta anticipating his shot with a smart block.

Argentina still resemble a sledgehammer balanced on a toothpick, teetering on the brink in defence but powerful going forward, their in-form captain an incomparable talent. Who can survive long enough to exploit their flaw?

The Maracana is an unlikely backdrop for the second ever meeting of Ecuador and France.

Gary marshals Big Alan, Juninho and Chris Waddle in studio BBC. Chris understates Messi’s talent with but-could-he-do-it-against-Stoke-on-a-wet-Tuesday-night disdain of the purest sort: ‘If you do a trick well, why stop.’ Ahem.

Gary references Ecuador’s 2006 campaign, their best, when England knocked them out in the last sixteen. ‘Oh, those were the days,’ says he, his grin tight.

Ivorian Noumandiez Doue referees, his failure to recognise a human cyclone of dragging in the penalty area during Chile’s win over Australia inspiring Socceroo fans to nickname him ‘An Inconvenient Strewth’.

Ecuador’s jersey-maker is Marathon, which is probably how far they’ve each had to run marshalling France who, despite failing to score, have nearly monopolised possession.

Guilty of overplaying, Les Bleus nonetheless cantered hither and to prettily. But enough about the dirty frogs, this is the BBC! What about England?

After a Gabby-heavy feature on some aspect of Hodgson and the lads’ failure, Gary tosses limp questions. Juninho, leaking the over-earnest insight of a non-fluent speaker, says ‘Sad to see England go so soon’ and that they ‘need details’ for tournaments. Uh-huh, absolutely...

At least ITV’s tame South American Gus Poyet has some English. How can you fly your employer’s flag without basic conversation? Jeez.

As unequal a 0-0 draw as Pirlo’s unstitching of England in Euro 2012, France spurned umpteen opportunities, a cocktail of sloppy finishing and sharp goaltending the twin frustrations. Dominguez could hardly have believed the chances rifled into his arms, although full-length dives were necessary too.

By the close, Ecuador needed two clear goals to qualify, which didn’t arrive despite late pressure on the French box.

The Swiss join France as Group E’s runner-up, thumping Honduras three-nil, but Hitzfeld will be wary. No team has played in Manaus and managed even a draw in their next game.

The US will offer an intriguing guide tomorrow against Germany, their Portuguese epic last Sunday also in the Arena Amazonia.

One final fever-bout of group matches, then, one last chance to predict and curse and celebrate and revel as the Carnival prepares to shed fully half of itself and accelerate to knockout-speed.

1 The Offload: Saracens prove Pro14 is not fit for purpose
2 Two in custody in Tour de France doping investigation
3 Bryson DeChambeau has the Green Jacket and Georgia on his mind
4 Born to ride, born to win: Sam Bennett, the making of a green machine
5 No Milanese hangover as Shamrock Rovers trounce Waterford
Real news has value SUBSCRIBE
Crossword Get access to over 6,000 interactive crosswords