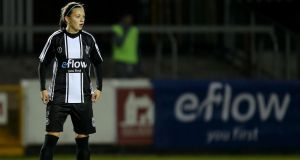 She will, says one FAI official “rip it up in England”. Even if her energy and enthusiasm were the only things that Katie McCabe was bringing to Arsenal with her then the entire Women’s Super League would be set for a shot in the arm during the months ahead.

Happily, there’s a good deal more to the 20- year-old Dubliner than that.

McCabe is in Cyprus this week with the Irish team but when she was back home last week to help promote the FAI’s Soccer Sisters programme, an initiative aimed at getting more girls involved in the game, she was, as she might say herself, buzzing about the year ahead.

Having made her mark on a senior international debut against Finland that confirmed her status as one of the country’s brightest rising stars, the former Kilnamanagh, Crumlin, St Joseph’s and Raheny United star comes across as slightly giddy at the thought of being a ‘gooner’.

The scale of the imminent challenge is not lost on her but it is the opportunity she’s focused on first and foremost and she is determined to grasp that with both hands.

“I’m really excited about it,” she says. “The whole thing is very full-time professional. Everything’s taken very seriously; the club want to do things right. Everyone at Arsenal is very aware that Manchester City and Chelsea are putting a lot of resources into their women’s set-ups and they’re determined not to fall behind.”

Last year they did a little with the club that dominated the women’s game for so long finishing the league three points behind City and five adrift of their west London rivals who lifted the title on the final day of the season and have strengthened their squad significantly since.

The third-place finish meant missing out on the Champions League, a competition that she has played in with Raheny and that Arsenal won in 2007. McCabe insists that returning to it for next year is a particular goal.

“Yeah, that’s a big thing but really the intention is to be challenging for all three trophies; we’ve got Reading in the FA Cup and hopefully we’ll take some momentum from that into the league.”

City expressed an interest late on in having her join another Irish recruit, Megan Campbell, up in Manchester while she could have linked up with Ruesha Littlejohn, Denise O’Sullivan and Clare Shine at Glasgow where she would surely have run riot and scored for fun.

The English league is better than the Scottish one, though, and she seems bound to benefit from choosing north London where Emma Byrne is only surviving member of a once strong Irish contingent.

She certainly likes the little of life she has experienced there so far with the house she shares with three other players in St Albans leaving her just half an hour from the city.

“I can’t see any way that I’m not going to like the move,” she enthuses.

There are other benefits too. Gary, her older brother who plays for Shamrock Rovers and with whom she is clearly close, will, she reckons, fancy the odd trip over. “He’s a Chelsea fan,” she says with a laugh, “but I’m pretty sure I’ll get an Arsenal jersey on him at some stage.”

The 27-year-old was, in fact, a key influence on her career, plucking her out of a local kids’ team when she was 10 and embarrassing the local boys with her skills and bringing her along to Crumlin United where she had an early opportunity to improve. A natural, whose attacking play from midfield is regularly compared to his, by the time she was 13 she was featuring for the Under-15 international schools side and she went on to be a key player for Ireland as they reached the semi-finals in the Under-19 European Championships in 2014.

Last year, when she made her senior international debut on her 20th birthday, Gary was there to share the moment. “Now that I’m in the Irish set-up and he sees me walking out to represent my country, I think he loves the idea that it was him that brought me along to Crumlin that time. He’s a proud brother, alright.”

But then he is entitled to be.