Irish players would have preferred replay to cash if deal on offer, O’Shea says 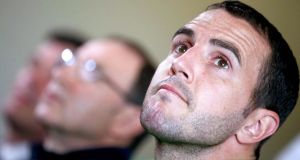 John O’Shea has said the only redress the players would have been interested in after Ireland’s controversial elimination by France in Paris six years ago would have been another game, not any share of €5 million secured by the FAI from Fifa during the weeks that followed. Photograph: Donall Farmer/INPHO.

John O’Shea has said the only redress the players would have been interested in after Ireland’s controversial World Cup play-off elimination by France six years ago would have been another game, not any share of the €5 million secured by the FAI from Fifa during the weeks that followed.

“What the players would have been looking for,” he said at the Irish team’s press conference ahead of Sunday’s friendly against England at the Aviva stadium, “now it was all done and dusted...would have been a replay, not anything monetary.”

O’Shea suggested that he regarded it as a bit rich for then France manager Raymond Domenech to say this week that the players should have got some of the money. He said that “the important thing is that the FAI have been as open as possible now about what happened.”

His comments came after the association released documents late on Friday evening that effectively confirmed that their dispute with Fifa was based on events during the game and the team’s failure to qualify as a result of what happened that night.

In the only interview he gave to coincide with the release of the documents, FAI chief executive John Delaney sought to claim that the legal issues had actually related to the seeding of the draw for the play-offs and Sepp Blatter’s behaviour in the wake of a meeting between the two men. None of this is supported in any way by the documentation released.

Ireland manager Martin O’Neill sidestepped questions about the controversy, merely observing that he was grateful to Delaney and the FAI board for the opportunity to manage the team, a job he said “I intend to see through.”

O’Neill expects to have everyone available for selection for the game against England. Stephen Ward came through training on Saturday morning without any serious problems despite some ongoing concerns about his longstanding ankle injury while Jon Walters took some part too as he gets back to full fitness after his knee problem.

Wes Hoolahan missed the session as he was attending the funeral of a relative but Darren Randolph was involved having returned from the United States where he had a number of family related obligations.

“So we’re all present and correct,” said O’Neill who gave nothing away about his team selection but complimented Paul McShane and Daryl Murphy on their form at club level over the last few months.

He went on to say again that the game has the potential to have a significant impact on Ireland’s key European Championship qualifier against Scotland next week. “Absolutely, if we can do well against England then there’s no reason why we can’t carry that carry that forward with us over the following six days.”

Asked about the team’s position in the qualifying table and his own, given the pressure to get to France next summer, he said: “It’s a big game for us but the consequences are always there. I’ve been involved in five consecutive games and we have a chance but we lost in Scotland and we have to try to redress the situation and win the game. But I think that sort of pressure goes with the game. We just have to take that on board and go with it.”

Before that, O’Neill said, he is again relishing the prospect of an England game. “Playing with Northern Ireland in the home international series, I used to always look forward to them. At that time we played them at end of season and while the England players might have thought the games surplus to their whole schedule, they were great for us and we enjoyed them. I was sorry to see them disappear from calendar. I think this game now will be competitive.”