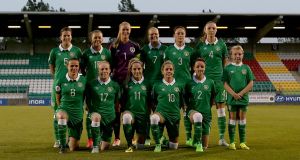 The Republic of Ireland women’s team produced a gritty performance to take full points from their trip to Portugal and get their Euro 2017 campaign up and running on Tuesday evening.

First half goals from Louise Quinn and Aine O’Gorman helped the Irish side come from behind at the Comendador Joaquim Almeida Fre Stadium in Moreira de Conegos after Portugal had opened the scoring against the run of play.

Ireland manager Sue Ronan made two changes to the side which lost to Finland last month with Ruesha Littlejohn and Karen Duggan coming in to replace Meabh De Burca and Diane Caldwell. Both went into midfield with Niamh Fahey going into the centre of defence and Sophie Perry switching from left back to right back to facilitate the move of Megan Campbell from the central defensive position she occupied against the Finns.

Portugal gave the noisy home crowd plenty to shout about in the opening minutes and Emma Byrne had to get down smartly to keep out a low drive by Portugese captain Claudio Neto. But then the Irish took control of the game and Karen Duggan twice went close with headers as Megan Campbell’s trademark long throw caused panic in the heart of the home defence.

The Irish were rocked on 16 minutes when Portugal scored from their first corner. The kick was played short to the supporting Sílvia Rebelo and her cross was headed beyond the reach of Emma Byrne and just inside the far post by Carole Costa.

That goal certainly got the home crowd going again but they were silenced six minutes later when Katie McCabe’s corner-kick from the left found Louise Quinn and she buried her header from six yards into the back of the net.

Ireland lost Karen Duggan after 33 minutes when the UCD Waves midfielder shipped a heavy knock and she was replaced by Diane Caldwell. Two minutes later Ireland carved out a great chance when Megan Campbell released Aine O’Gorman but Katie McCabe wasn’t able to connect with the pull-back.

However, in the 39th minute, it was Ruesha Littlejohn’s turn to carve open the home defence when she sent Katie McCabe clear. Her goalbound shot was brilliantly parried by Patricia Morais and Aine O’Gorman reacted quickest to the rebound to head home her eighth international goal and first in two years.

Ireland then lost a second member of the starting line-up when Megan Campbell took a blow to the head as she cleared a cross and after a lengthy delay she was stretchered off and taken to hospital. Stephanie Roche replaced Campbell and went up front with O’Gorman switching to right-back and Sophie Perry moving to left back.

The break didn’t seem to affect Ireland and just before the half-time whistle Julie Ann Russell had an excellent chance to virtually wrap things up but she shot wide with the goals at her mercy.

The second half saw Portugal enjoy the bulk of the possession but they found it extremely difficult to break down a resolute Irish defence. There were a few heart-stopping moments like when Emma Byrne failed to hold an Ines Silva shot but Louise Quinn was on hand to clear. The Irish skipper also denied Ines Silva late on when she tipped her sizzling free-kick over the bar.

While Ireland didn’t create as many chances in the second half as they in the opening period they almost grabbed a third goal in the 52nd minute when Diane Caldwell left fly from 25 yards and Morais produced the save of the game with a spectacular leap to tip the ball over as it headed for the top corner.

A third goal would have made life a lot more comfortable for Ireland but they dug deep to keep Portugal at bay and take the three points their disciplined performance deserved. With Spain beating Finland 2-1in Helsinki the scene is now nicely set for next month’s game against the Spanish in Tallaght Stadium.