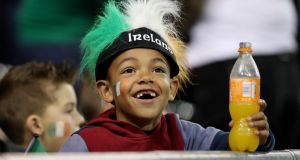 The crowd in the Aviva Stadium was in general on the small side, physically if not in numbers. Photograph: Tommy Dickson/Inpho 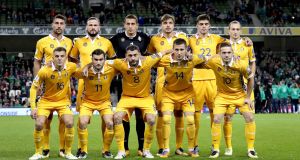 Moldova is the poorest country in Europe these days, so match-day tourists were thin on the ground. Photograph: Ryan Byrne/Inpho

It must have been the smallest group of travelling supporters to attend a World Cup qualifier in Dublin, at least since the end of the communist era, and the lifting of the Iron Curtain.

But Moldova is the poorest country in Europe these days, and is still reeling from a near €1 billion bank fraud in 2014 that accounted for 12 per cent of the nation’s GDP.

So match-day tourists were thin on the ground on Friday. And when we finally found some, they turned out to be a TV crew.

Their spokesman, Adrian Bucur, thought there might be “a handful – maybe five or 10” – others who had made the expensive journey. Otherwise, he forecast, the only Moldovan fans at the game would be people who lived in Ireland already.

Even they seemed scarce and, when you did find them, a bit on the shy side. One Moldovan scarf wearer who was heard buying match souvenirs in fluent English became suddenly mute when asked for a comment on the game.

Perhaps significantly, he was wearing a baseball cap with the letters “FBI” on it, although his demeanour suggested this might be a cover for something else (a CIA cap, maybe). Even a request for a “quick match prediction” was firmly rebuffed, as if it was a matter of national security.

After much searching, we did at last locate some more congenial Moldovans. Sure enough, Denis Bulat, Alex Plohii, Victor Muneanu, and Ion Iurescu all lived here. And not only were they talkative: life in Ireland had also made them irrationally optimistic.

Defying conventional wisdom, three of them tipped their team to get a draw, while Plohii stuck his neck out and predicted a 2-1 win for Moldova.

The crowd in the Aviva Stadium was in general on the small side, physically if not in numbers. There was a much higher than usual presence of school groups, as if reflecting a fall-off in adult enthusiasm after the Republic’s recent setbacks.

One thing the competing countries had in common last night was that both have had IMF bailouts in recent years. But in the context of football, it was a different kind of Bale-out – the injury to Welsh superstar Gareth – that offered Ireland hope of still qualifying for next year’s finals in Russia.

In the event, that wasn’t enough to do us any favours in Friday’s earlier game, where Wales won. So all Martin O’Neill’s team could do was match that and keep their hopes alive going to Cardiff next Monday.

As expected, this proved the easier part of the challenge. The Moldovan TV crew had joked beforehand that the visitors would treat the game as a “friendly” and give the hosts “three easy points”. That was probably the standard underdog ploy of trying to put the mockers on the opposition.

Instead, thanks to two early goals by Daryl Murphy and another midfield masterclass by Wes Hoolahan, it was an accurate enough prediction of the game.

1 ‘A radical departure’: Who are CVC and what are their aims with rugby?
2 Ken Early: Champions League has stolen international football’s clothes
3 Ger Loughnane and the spark that lit Clare’s hurling revolution
4 Connell losing touch with club championship is real tragedy of Normal People
5 1913: The year the GAA really started to get its house in order
Real news has value SUBSCRIBE
Crossword Get access to over 6,000 interactive crosswords