Ireland back in the chase after good day all round 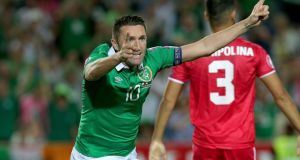 Republic of Ireland captain Robbie Keane celebrates scoring the first of his two goals in the Euro 2016 Group D qualifier against Gibraltar at Estadio do Algarve in Faro, Portugal. Photograph: Donall Farmer/Inpho

His name may not have the same sort of familiar ring to it as Gary Mackay’s and this time around there is still a good deal more work to be done if qualification is to be secured but Valeri Kazaishvili’s solitary goal in Tbilisi did at least as much yesterday to revive Ireland’s Euro2016 hopes than any one thing that happened here in the Algarve.

After the Scots had slipped up, Martin O’Neill’s side simply needed to avoid returning the favour to make it a good day. In the end, they secured their expected victory without too much fuss or drama.

Robbie Keane wrapped things up in three second-half minutes with a tap in and penalty but Cyrus Christie was perhaps the greater Irish hero. With almost half an hour played and things having the potential to start getting just a little sticky, the Derby right back skipped past two opponents and then from a tight angle curled a low shot into the far corner with the outside of his right boot.

It was quite something from the 22-year-old, who had played 90 club games since scoring for Coventry against Doncaster two and a half years ago, while a crucial defensive header minutes later marked him out as the key contributor of the half.

It was not one that would be remembered fondly by the Irish fans for much else really, with the visitors certainly having the better of things but never looking in complete control.

Jon Walters had his first-half chance just six minutes in and Gibraltar had a few lucky scrapes but they have improved since the game in Dublin, slightly, and they had a chance or two themselves, most memorably an impressive strike from Liam Walker that forced Shay Given into a decent save.

Christie had started in place of Seamus Coleman who missed out due to a tight hamstring that is expected to be okay by Monday. O’Neill handed starts too to Jeff Hendrick and Ciaran Clark in a side that that started out as 4-4-2 but quickly shifted to a 4-3-3 with Wes Hoolahan operating centrally behind Walters and Keane.

All worked hard to break down a side that got nine men behind the ball at the first real sign of danger, and with the likes of Clark, who headed against the bar early on, chipping in at various set pieces, it always seemed hard to imagine that the breakthrough wouldn’t come.

Ireland ended the half with John O’Shea claiming he should have had a penalty after being pushed by Roy Chipolina as he tried to get on the end of another Brady free kick. Still, they were still only one up, which might have been of more concern had Poland and Germany not both won by seven here after being in the same position.

Sure enough, Gibraltar’s resistance started to crumble soon after the restart. The game’s second goal had had a hint of farce about it with Jean Carlos Garcia turning a low Walters ball onto his own post after which Jordan Perez allowed the rebound to squeeze beneath him. Keane was quick to spot the opportunity and none of his previous 65 international goals can have been any more easy to put away.

Number 67 followed within three minutes when Walker made a clumsy attempt to tackle Wes Hoolahan inside the box and from the resulting spot kick, the Irish skipper coolly sent Perez the wrong way. One more for the Dubliner now and he’ll be level with Gerd Muller in the international scoring charts but his hopes of another hat-trick here were ended when he was replaced by Shane Long with 17 minutes remaining.

The hosts, by now, were clearly well beaten and Ireland, entirely comfortable, continued to create chances. James McCarthy did little to stand out over the course of the game but when he finally had a crack at goal himself, Perez made a good save. Walters then missed an open goal after Stephen Quinn’s shot had been deflected into his path and O’Shea had a half chance in a crowded area as yet another free was floated in.

Ten minutes from time Long rounded things off with a well placed header after good work by Christie and Hendrick down the right. If Ireland had scraped through to win by a quarter of the margin then there would have been no shortage of people in the mixed zone afterwards saying they would take the three points regardless. In the end, it was far from dazzling stuff but they did a good deal better than that.

The table, in any case, tells the tale. Ireland are third and some of the confidence that the Scots exuded over the summer will be suddenly gone. It is still all very much to play for but Martin O’Neill and his men are most certainly back in the game.