Grant Hanley out of Scottish squad for Poland game 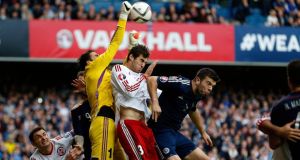 Scotland’s Grant Hanley (right) is out of the game against Poland. Photograph: Russell Cheyne/Reuters

Grant Hanley has withdrawn from the Scotland squad for the 2016 European Championship qualifier against Poland tomorrow night, the Scottish FA have confirmed.

The Blackburn Rovers defender picked up a knee injury in the 1-0 Group D win over Georgia at Ibrox on Saturday.

Hanley has struck up a partnership with Norwich City’s Russell Martin under manager Gordon Strachan who has Brighton’s Gordon Greer, Christophe Berra of Ipswich and Aberdeen’s Mark Reynolds as possible replacements.

Poland sit top of the section with six points from two matches following their shock 2-0 home win over world champions Germany on Saturday.

Martin, though, is armed with research on Bayern Munich danger man Robert Lewandowski and confidence from Scotland’s recent performances on the road.

”We will watch all the videos on him before tomorrow,” said the 28-year-old. “He is a fantastic player but the staff here prepare us for everything. But I’m sure we have seen enough of him in the Bundesliga with the goals he has scored to know how dangerous he is. So we will be ready.”

Scotland have also won in Croatia, Macedonia and Norway under Strachan and Martin is sure they can add another away win to their record against the confident Poles.

“We have had a lot of matches like the one we will get tomorrow over the last 18 months and the way we have dealt with them has been brilliant,” he said.

“If we can keep that level up I’m confident we can get a result.

“Mentally it is a boost that we have already been to Poland this year and won. We know we can go there and do it.

“They had a couple of players missing on that night, but the way we are playing at the minute, we can be confident of going anywhere and putting in a performance that we can be proud of.

“The manager is always on to us that he wants us to put in a showing that we can be proud of. We did that against Georgia and we have to do the same against Poland tomorrow.”

1 Liam Toland: Larmour can distract England while others flourish
2 ‘Manchester United are lucky to have you’: Klopp responds to Donegal schoolboy’s letter
3 This month a decade ago, football and Dublin changed course
4 Cian Healy’s hunger for battle undiminished by the years
5 Solskjaer complains about Molten balls after Brugge draw
Real news has value SUBSCRIBE
Crossword Get access to over 6,000 interactive crosswords