Speaking from the Irish training camp in Malahide, Emmet Malone gives a squad update and a preview to Friday's clash with Scotland. Video: Daniel O'Connor 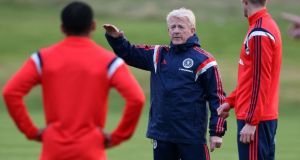 Gordon Strachan, pictured here during a training session near Glasgow this week, has revitalised the Scotland team. Photograph: Andrew Milligan/PA

A little truck stuffed with goalposts and dirty footballs pulled away from lush grass in front of the stately hotel on the banks of the Clyde on Monday. The scene jarred with plump carpets and statues of stags. ‘Fitba’ was surely another world away.

But this is the SFA’s HQ for the week and there was talking to be done. “The propaganda” has long been Gordon Strachan’s cutting description of this stage of pre-match build-up, a term that Strachan has employed in every managerial job from Coventry City onwards. He is a 57-year-old determined to make his declarations on the pitch.

Some 18 years after succeeding Ron Atkinson at Highfield Road, Strachan remains dismissive of the chatter around football, and there is evidence suggesting that preparation on Clydeside is the reason for the material difference he has made to his national team in 22 months as manager. His is a New Scotland.

But all the talk is not irrelevant because Strachan’s words have helped lift previously subdued players, who in turn have altered the mood of a nation. As Denis Law said this week: “There’s a real feeling about us now. I think everyone is happy at how Gordon is doing.

“You just feel something is going to happen.”

Scotland are demonstrably better than when Strachan took over.

There is more to it than personnel, results and formations. There has been a rekindling of enthusiasm and dash. As Mark McGhee, one of Strachan’s best friends and his assistant told a gathering on Monday: “My feeling was that a style had to emerge, that we had a consistent way of playing, that we weren’t chopping and changing and that we found a way to play that suited the players.

“To some degree we’ve managed that. People around this table know that on Friday night they can expect us to play a certain way.”

McGhee said that “style” had been one of the priorities he and his old Aberdeen teammate had identified. The desire for that was amplified because of what had gone before.

“Gordon’s attempting to play good attacking football,” Law added. “We don’t have to mention names but there was one before who didn’t even have a forward line. How does that come about?”

Scotland will always have Prague. Part of the explanation for the new Scottish optimism embodied by Strachan lies in the pessimism personified by his predecessor, Craig Levein.

That general feeling was made flesh on the infamous night in Prague four years ago against the Czech Republic when Levein fielded a 4-6-0 formation. The Tartan Army wailed into their kilts. Men like Law winced. Scotland lost 1-0.

Scotland failed to reach the finals of Euro 2012. Levein remained in post for another two years and oversaw the beginning of World Cup qualification, but he never recovered fully from Prague.

With two points from the first four games, Levein was out. Scotland would not be going to Brazil.

Strachan was the populist choice as replacement. Although in his most recent posting, at Middlesbrough, Strachan had failed to rouse the Teesside club and did not see out a year at the Riverside, his achievements at Celtic were admired at home, and there was the memory of his conspicuous skill and commitment as a gifted Scotland player who won 50 caps.

But then, last June, came Zagreb. If Prague 2010 represented Scotland’s Year Zero, Zagreb 2013 stands as a coming of age. Against Croatia, fourth in Fifa’s rankings, Scotland won 1-0 with a goal from Robert Snodgrass.

Snodgrass was one of six changes from Levein’s last match, along with the likes of Barry Bannan and Leigh Griffiths. Bannan and Snodgrass are ball-players. The ball was to be passed and retained by the New Scotland.

What others saw also was a change in tone.

“Prague was a turning point. Fans felt the team had stagnated. Disillusion is a good word for the mood.

“Strachan’s a bit more adventurous and though many of the players are the same, they look a different team. Scotland aren’t going into games to sneak a result.”

The Northern Ireland manager Michael O’Neill, who lives in Edinburgh, says: “There’s a whole different dynamic in Scotland because of Croatia”; and speaking from Belgium yesterday, where he is managing Genk, one of Strachan’s Scotland’s predecessors, Alex McLeish, says: “You have to get a result first to show players the evidence, proof of your work, and that was Croatia.

“You show the players the video after and say: ‘You did that.’ It’s a way of empowering them. Then you get confidence.”

At HQ on Monday there was attention on the young players Strachan is assimilating into the set-up.

Hearts’ 20-year-old defender Callum Paterson is the latest and McGhee said there would be more.

There has been other fresh blood in the form of Ikechi Anya, a 26-year-old Glaswegian playing for Watford introduced by Strachan last year. Anya scored Scotland’s equaliser against Germany in Dortmund in September.

“They are well-organised and more confident. You’ve got players who were under-achieving who are reaching the levels they should.”

Strachan himself downplayed any tactical innovation that landmark night in Zagreb. “It’s amazing what you can do with a group of players who play for each other,” he said. “The lads played from their hearts.

“They played as a group, 24 of them trained as a group. You can’t do it if you’re not really convinced about doing it.”

This revealed a core Strachan belief: “It’s about the players.”

That is heard frequently because while Strachan disdains the propaganda, he is simultaneously an ITV pundit. In that role he shared opinions and drinks at the World Cup in Brazil with Martin O’Neill.

“And we’ve done stupid things,” Strachan added, “like having our meal on the bed, me and him watching football. It was like Morecambe and Wise.”

Author Irvine Welsh put it this way when Strachan was emphatic on TV in the summer: “A man screams the truth in a house of liars.”

Welsh and Strachan grew up 18 months apart on the same Edinburgh housing estate. Strachan departed for Dundee, aged 14, but Welsh claims him as a fellow ‘Hibee’ – a Hibs supporter.

Strachan made his debut at 18, joined Aberdeen under Billy McNeill, which is where he met McLeish.

“Wee Gordon,” McLeish says, “he always had a fantastic sarcastic wit. Quite a tongue. I said to him: ‘I hope you can fight.’”

McLeish saw Strachan mature under Alex Ferguson at Aberdeen and Manchester United, and win the league title with Leeds United – and Footballer of the Year – at 34.

As a manager there were ups and downs with Coventry and Southampton before Strachan took Celtic to the last 16 of the Champions League. Given what he is overseeing now at Scotland, Middlesbrough might come to be seen as a blip.

“Being an international manager, it’s a niche position,” McLeish says. “Make no mistake, it’s still a full-time job, and Gordon is out on the pitch working, hands-on.

“But he’s a granddad now and the Scotland niche suits him. It’s perfect for him.”

Strachan might label it “propaganda” but confident, happy, maturing, he and his New Scotland look ready.

1 Gordon D’Arcy: If South Africa moves up north, it could all go south
2 South African franchises could join Pro16 by next March
3 Charlesland Golf Club set to close permanently in December
4 Stephen Kenny feeling hopeful ahead of Euro 2020 playoff
5 When Down’s 1960 All-Ireland victory brought down barriers
Real news has value SUBSCRIBE
Crossword Get access to over 6,000 interactive crosswords