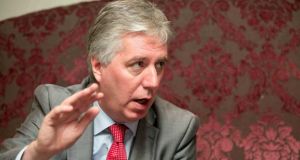 The FAI has failed to respond to questions put to it regarding a video showing its chief executive, John Delaney, singing the republican ballad Joe McDonnell, a song written from the perspective of an IRA member convicted of firearms offences in 1977 following a bomb attack on a furniture shop the previous year. McDonnell died on hunger strike in July 1981.

The video, which was posted on YouTube last week, was recorded last Tuesday night in The Bath pub, around the corner from the Aviva Stadium. Earlier in the evening Ireland had recorded a 4-1 home win over the USA. It shows the association’s chief executive singing at the bar while a crowd looks on.

In it, Delaney can be seen and heard singing the section from towards the end of the song: “Who died unselfishly
And Patsy O’Hara, and the next in line is me
And those who lie behind me
May your courage be the same
And I pray to God my life was not in vain . . .”

Those mentioned in the previous line are Francis Hughes and Raymond McCreesh. Both also died in the Maze hunger strikes; the former was once reputed to be Northern Ireland’s most wanted man while the latter was, in addition to the offences he was serving time for at the time of his death, linked in June 2012 by the Police Service of Northern Ireland’s Historical Enquiries Team to the Kingmills massacre of 1976 in which 10 Protestant workmen were taken off the bus in which they were travelling, lined up and murdered.

Ironically, Delaney was singing the song on the same night that the England football manager Roy Hodgson apologised “if anyone was offended” by the singing of anti-IRA songs by England fans at Celtic Park. Both England and Scotland are due to play against Ireland in Dublin next June.

Neither Delaney nor the association’s communications director returned calls from The Irish Times relating to the matter.