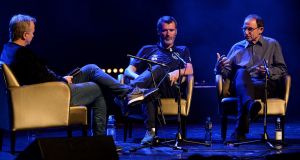 Today FM presenter Matt Cooper with Roy Keane and Martin O’Neill: the Republic of Ireland manager joked that he did not want people to think he and Keane were ‘queers’

The FAI has failed to respond to requests for a comment on reports that Republic of Ireland manager Martin O’Neill used the derogatory term “queers” in a joke on stage at a Today FM event in Cork last Wednesday evening.

O’Neill, in a section of a conversation with Matt Cooper that was subsequently cut from the broadcast version, was asked about a trip he made with his assistant, Roy Keane, to the Super Bowl earlier in the year.

The 64 year-old, in an ill-advised attempt at humour, made the point that two of the national team’s coaches, Steve Guppy and Steve Walford, had travelled too as, he suggested, he did not want people to think he and Keane were “queers”.

Speaking yesterday to the Sunday Times, Kieran Rose, chair of the Gay and Lesbian Equality Network, described the comments as “deeply regrettable” and called on O’Neill to make a public statement of support for the involvement of LGBT participants in sport.

For the Ireland manager, the controversy follows the one he caused in March when, in response to a question about the presence of players’ wives and girlfriends around the team hotel in France, he suggested the more attractive ones would be welcome but not the “uglier ones”.

He routinely apologises during his press conferences for how awful his jokes are, which in itself appears to be part of a comic routine but now, as in March, he appears surprisingly slow to say sorry when his jokes stray into genuinely offensive territory.

The FAI did not respond to a call from The Irish Times about the matter.

James McClean, meanwhile, has endorsed Keane’s verdict on Tuesday night’s performance with the Derry-born winger acknowledging the team performance against Belarus in Cork was not what would have been expected from an Ireland team in the circumstances.

Keane suggested afterwards – in that Today FM interview – that some of what he had said had been tongue in cheek but the generally critical tone was clear. McClean admits some of those involved should have done better.

“I thought his comments, to be honest, were spot on,” he said. “Not everyone can always have a good game but the bare minimum is that a player should put 110 per cent into his performance. You should come off the pitch, good game or bad game, saying, well, you know what, I gave everything.

“It might not have come off, but least I can say I put 100 per cent in. So he was spot on. I can only speak for myself but I’m here, I want to play and I’m not just happy to be here. I want to do everything I can to play as much as possible. So I thought he was bang on with his comments.”

The 27 year-old’s performance was not quite what he would have hoped for but, as he suggests, he certainly could not be accused of not giving his all, something he seems always to do, whether for club or country.

“I was a fan growing up as well so just sitting in front of the TV watching games when you were a young boy and things weren’t going well, you’d be thinking, ‘if I could do this’ or ‘I could do that’. Well, now I am in a position where luckily enough maybe I can do something about it. So I just try and give it my all.”

After getting married a couple of weeks ago, McClean has had to defer his honeymoon until after the tournament with his wife, Erin, on something like standby.

“We want to be in the tournament as long as we can be,” he says. “I would sacrifice a honeymoon all day long for that. And I’m sure my missus would understand as well. Hopefully we can postpone the honeymoon for as a long as possible. She’ll be coming to the Euros. That was always the plan. Fair play to her: she knows that the football comes first and she has always supported me.”