Fifa comments in Scotland programme lead association to replace them at €10,000 cost 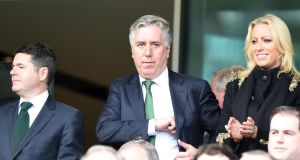 The FAI shredded and replaced 18,000 programmes for Saturday’s Euro 2016 qualifier with Scotland after comments made by John Delaney about Fifa. Photograph: PA

The FAI have shredded and replaced 18,000 matchday programmes ahead of Saturday’s European Championships qualifier against Scotland in order to get rid of comments made by John Delaney about corruption in Fifa.

The Irish Daily Mail have reported how in his traditional pre-match message Delaney spoke about the scandal which has gripped football’s chief governing body, leading the FAI’s communications team to decide to scrap the programmes and print new ones at a cost of €10,000.

In a statement the FAI have said the decision to replace the programmes with a batch of new ones was taken without the knowledge of Delaney himself.

The FAI statement read: “John Delaney was entirely unaware of this change to the programme. He had already signed off on it and it was approved for printing.

“The decision to delete his comments where they related to Fifa was an editorial one that was taken by the communications department, which is run by Peter Sherrard. ”

In the original programmes the FAI chief executive had said the following: “Off the pitch there has been seismic change on the global football front with Sepp Blatter’s announcement of his resignation as Fifa President.

“That decision was a major step and allows the football world to address the need to change the culture of Fifa.

“It was all too obvious that the culture was one of corruption and bribery. Those who love the game have been crying out for change and now the opportunity is there.

“I have stated many times that the global body needs to adapt the attitude of accountability and transparency which has been cultivated in Uefa under the leadership of Michel Platini and I hope that Fifa can take similar steps in the right direction.”

Copies of the programme available to supporters at the crunch game at The Aviva on Saturday will be identical to the ones which were pulled, however the paragraphs in Delaney’s message which discuss Fifa and Uefa have been removed.

Earlier this week it was revealed Delaney will not face Oireachtas questioning about the €5m pay-off from Fifa for a Thierry Henry handball which cost Ireland a World Cup place.

The money was classed as a loan and used to pay of debts for the redevelopment of the old Lansdowne Road into the Aviva stadium.

1 James McClean still failing to learn his own online history lesson
2 Matt Williams: We all need a bit of Bud Maher’s resilience right now
3 A beautiful, happy accident - Moneyball is the best sports movie ever
4 Nicholas Quinn: ‘Swimming became how I dealt with grief’
5 Is it time for the New England Patriots to tear it down and start again?
Real news has value SUBSCRIBE
Crossword Get access to over 6,000 interactive crosswords