FAI fooling nobody by playing numbers game with attendance figures 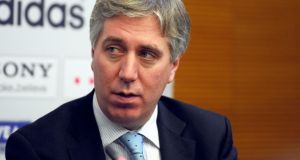 Irish football’s relationship with official attendances has always been a slightly complicated one. When there is a divvy up of gate receipts to be done or a safety regulation to be complied with, crowds can be surprisingly small.

Pride and commercial considerations can have precisely the opposite effect and it is for these reasons that the FAI has been widely suspected of taking liberties over the last few years.

The crowd for the game against Turkey on Sunday evening was officially put at 25,191 which would mean that the Aviva Stadium was almost precisely half full. Most of those who tried to weigh up the numbers for themselves, however, would have come down closer to the Press Association estimate, presumably filed before the official number was issued, of around 15,000.

The association reckons 3,000 watched the FAI Junior Cup final then left. It doesn’t bridge the gap but then it really doesn’t matter. The bigger issue is the question of how many people who attended the game actually paid in.

Before the redevelopment of Lansdowne Road just about every game attracted close to a full house and almost everyone paid for their tickets because there was a genuine fear that if you let your block booking go for the Malta game to someone else then when Germany, France or Italy came to town you might genuinely struggle to get in.

The stadium increased the capacity for football matches but also hugely increased the financial pressure on the association which needed to pay for its share of the building costs. The Vantage Club was supposed to be the answer but, when it failed, even after so many members of the football family had their arms twisted to buy in, the association found itself having to offload tickets in one way or another through other means.

The fact that you could buy a premium level seat for a game for €70 exacerbated the existing pressure to slash prices and the prospect of ever missing out evaporated. If you’d tried at the last minute to bring your family to see Wales play in Croke Park in 2007 – when more than 72,000 went along – it would have cost you €320 because premium level seats were about all you would have been able to buy.

That’s a pretty significant incentive to but but you can roll up with the kids now and pay less than a fifth of that and, even more worryingly from the association’s point of view, you can hang on, see what the weather’s like or whether the fancy actually takes you and maybe just stay at home.

The association has, to be fair, reacted fairly strongly. Prices for the Turkey game the other night started at €20 for adults and €10 for kids which is hard to argue with. That can only add to the concern up in Abbotstown, however, about the way they have lost a once loyal audience.

There have been close to 6,000 “season tickets” – sold at what even critics would generally admit are very competitive prices – in circulation for the last couple of seasons.

However, holders of these, like those of the original overpriced premium tickets who have since found themselves sitting beside people who bought theirs for a fraction of the price and with none of the long-term commitment.

The same people have routinely been frustrated by finding themselves sitting next to those who might have been given free tickets after a John Delaney club visit, got an adult and child ticket as part of a summer camp promotion or cut out coupons in newspapers so as to buy at a hugely discounted rate.

This, said the FAI last night, has been finally addressed and the association insists it will no longer be undercutting its own promotions with those run through third parties although sponsors are still free to give away or discount their tickets in whatever way they see fit.

Delaney said at the weekend that with games against England, Poland and Scotland amongst those included in next year’s season ticket things are taking a turn for the better. Sales have already exceeded 5,000, he claims and anything between 10,000 and 15,000 is achievable for next year. Beyond that, he suggests, the new Uefa scheme to beef up friendlies into a league structure should also help greatly. Financial sense It will be great if it pans out but in the meantime the closest the association generally comes to selling out its home is for friendlies involving not its national team but British clubs sides who often field teams that are weakened to the point of being almost unrecognisable.

It has come to something, meanwhile, when it makes more financial sense to have Ireland play as many as possible of its games abroad due to relative lack of expense and the guarantee of a pay cheque from a promoter.