Euro 2016: History in France’s favour but Portugal have a game changer

France manager Didier Deschamps insists he has 'no tension' ahead of the final of Euro 2106 where his side will face Portugal. Video: Reuters 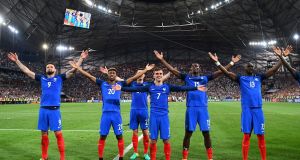 Scorer of both goals against Germany in the semi-final, Antoine Griezmann (number seven), celebrates with his France team-mates in Marseilles. Photograph: Getty.

If the draw for this tournament suggested that the organisers wanted to give the hosts every chance of making Sunday’s final then Didier Deschamps and his men can, at least, be admired for the way they have seized the opportunity that was presented to them.

Portugal, though, know all about losing a title decider you are supposed to win and though almost all logical argument ultimately points to France wrapping up their third European title in St Denis, the presence of Ronaldo is enough in itself to ensure that nothing can be taken entirely for granted.

The behaviour of the Real Madrid star can, like this Portugal team’s tactics, be tiresome at times and neither will have done much to generate the sort of popular support from neutrals that underdogs usually enjoy in these situations. But Fernando Santos’ side had earned its place in this final too, most obviously by grinding its way past Croatia then Poland in the early knockout stages when both opponents must have been hopeful that things would go rather differently. They have, for the most part, done no more than they absolutely needed to, most obviously in their final group game with Hungary when they came from behind three times to secure the draw they required but the caution on which so much of the approach is built would have gotten them nowhere had it not been for the attacking prowess of their captain.

Love him or loath him, it is impossible to seriously question either Ronaldo’s incredible talent or his determination to use it to its full extent in order to haul this team all the way to the title that eluded them back in 2004 when, as a teenager, he started a final against Greece that his side dominated in absolutely every way bar the one that actually mattered.

Nani and Pepe have both had good tournaments here too while a handful of other players have stepped up to the extent required of them for the team to progress but it says something about the 31-year-old that, while the French side’s statistics are more impressive on most fronts, the Portuguese have, over their six games, matched the hosts for attempts on target with 12 of their 36 down to him.

For the French, Antoine Griezmann has scored six times but more significant, perhaps, is the number of the players they possess that can hurt opponents. Dimitri Payet has been outstanding at times while Paul Pogba and Olivier Giroud have made big contributions at key moments. They are dangerous both from set pieces and open play and the Portuguese will have to improve on the defensive side of their performance against the Welsh if they hope to keep them at bay in the final.

The return of Pepe, after a thigh strain kept his out of the semi-final, for Bruno Alves would certainly help on that front and Santos is also boosted by the availability after his one-match suspension of Sporting midfielder William Carvalho, who is likely to anchor the midfield in place of Danilo.

For Deschamps, the question is whether to alter a winning side which, it should be noted, he has done more than once already in this tournament.

Critically, he must decide whether to bring back N’Golo Kanté in an attempt to curtail the supply of ball to the all-important Portugal frontmen. The drawback being that it would mean either shifting Pogba forward and Griezmann out wide or, more unpalatably at this stage, dropping the Juventus star to the bench again. The latter option just seems to be out of the question and so the manager seems likely to persist with Moussa Sissoko.

Before the tournament, it was about his team’s defence that all the big questions were being asked and Deschamps can count himself lucky that he had the games against Ireland and Iceland in which to settle on a couple of the answers.

Ultimately, he appears to have concluded that Samuel Umtiti is the safer bet than Adil Rami but the 22-year-old is far from a sure thing and the Portuguese will be hopeful that his inexperience might be exploited on such a big occasion.

If Portugal can snatch something to hold on to and the French start to feel the pressure then Santos and co might finally, after so many close calls, lift the title the nation craves but if they do win it will almost certainly be a tight affair for the Wales game was their first victory by more than a goal in three years and France are unlikely to wilt the way the Welsh did.

More than that, the French just seem to have goals in them right now as well as momentum behind them. It has taken time but the people, like the players, now believe that they are on the verge of their first European title since 2000 and a third tournament win on home soil after the Euro success of 1984 and World Cup triumph of ’98.

It will not be all one-way traffic in the stands any more than it should be on the pitch with the estimated 1.2 million Portuguese French community (three Portugal players, including two likely starters Raphaël Guerreiro and Adrien Silva, were born here) expected to be well represented amongst the crowd in St Denis and the occasion has the potential to be a great one.

France have triumphed on each of the three occasions that the two sides have met competitively before, however, and Portugal will need something – someone – special to prevent that now becoming four in a row.