Robbie Brady is ruled out, but Shane Long expected to train for tomorrow’s match 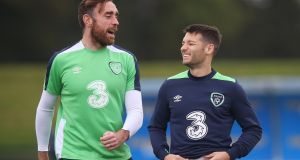 Wes Hoolahan (right) is in line for a starting spot as the Republic of Ireland play Moldova in Chisinau on Sunday. Photograph: Brian Lawless/PA Wire

The Republic of Ireland squad arrived in Chisinau last night without Robbie Brady, the Norwich midfielder who was left behind so as to continue his recovery from the head injury his suffered late in the game against Georgia on Thursday night.

Martin O’Neill said immediately afterwards that Brady had been out cold for a short time as he lay on the ground following his clash of heads with Rubin Kazan defender Soloman Kvirkvelia and that the Dubliner had suffered a concussion, something that would immediately rule him out of Sunday night’s game against Moldova. Shane Long’s situation will be monitored as he looks to shake off a minor injury also sustained during game.

The manager’s midfielder options have been significantly curtailed for the second part of this double header with Jeff Hendrick ruled out by suspension after he was booked late in the Georgian game, his second yellow card of the new campaign, while Harry Arter will stay with his club in order to continue receiving treatment on the groin strain that kept him out of Thursday’s game.

Arter, meanwhile, has confirmed to the manager that he remains entirely committed to playing for Ireland. The two men spoke yesterday after O’Neill had been asked the previous evening about suggestions on social media that the midfielder might be about to make himself available for selection by England, something that he is still entitled to do as he has not yet played a competitive international.

Given the circumstances, meanwhile, Wes Hoolahan looks likely to come into the reckoning to start on Sunday while Glenn Whelan, Eunan O’Kane and David Meyler are the main other midfielder options open to the manager whose first hope is that the team produces a better collective performance.

“I think we need everyone to step up to the mark,” he says. “We can’t afford to carry anybody. We didn’t play well enough. But we’ve won and that becomes very important.

“Whatever the team lacks,” he continued, “they’ve shown over the last two years that they keep going. We drive on. They don’t give in and don’t give up on what might be a difficult cause. I’m delighted with that.”

O’Neill said that he and the players have a good deal of work to do on preparing for the Moldova game as the entire focus had been on Georgia but the hope will be that the hosts this weekend will not provide quite such a stern test for their somewhat depleted visitors.

With a team comprised mainly of players playing for clubs in the country’s domestic league, Moldova took just two points from their last campaign, both away, against Liechtenstein and, more surprisingly Russia. Despite Austria, Sweden and Montenegro all featuring their group too, however, they did not concede more two goals in anyone game.

That has changed in these early stages of this new campaign with Wales beating them 4-0 last month and Serbia winning 3-0 in Chisinau on Thursday evening.

“Six points is a must, isn’t it?” says Jon Walters of the Ireland schedule for this week. “They’re tricky games and obviously the other games are important, that’s probably a good result [between Austria and Wales], a 2-2. But we hope to get maximum points come Sunday.

We all know it wasn’t good enough (against Georgia but) “I think if we come out of the week with six points from the two games, that’s the most important thing.”

“You look at the last qualifying campaign. There are going to be ups and downs and twists and turns, I don’t think it’s ever straightforward. Hopefully we’ll get lots of positive results and keep ourselves right up there (because) qualifying for a major tournament... the most important thing is the result. The performance can improve and we’ll work hard in doing that but the most important thing is the result. We’ve got to stay in with a shout, just grind results out. We did that (against Georgia). But there are plenty more important games to come up.”

Potentially one of the most important will be the visit of Austria to Dublin next June which could present a particular challenge given that it does not take place until the 11th, three weeks after the end of the premier league season and more than a month after the regular Championship campaign wraps up.

The FAI had suggested that they would stage a friendly aimed at helping O’Neill with his preparations for the qualifier and yesterday they announced that Uruguay will visit Dublin on Sunday the 4th, one week before the World Cup game.

The South Americans, twice world champions, who are currently ranked number nine in the world, last visited Dublin in March 2011 when they won 3-2.

1 Diego Maradona dies of heart attack, aged 60
2 Keith Duggan: Through the glories and the disgraces, we were all Maradona addicts
3 Gordon D'Arcy: I know what Joe and Cheika would do. Fix the basics
4 Darragh Ó Sé: Cork and Donegal went out with the wrong attitude
5 Handful of God: Five magic Maradona moments
Real news has value SUBSCRIBE
Crossword Get access to over 6,000 interactive crosswords