David Meyler: ‘I’m confident that we will be going to Russia’ 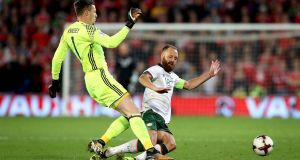 So much had happened in such a short space of time that David Meyler was struggling to take it in and when Ireland’s captain was asked about who he might prefer to face in the playoffs he struggled even to remember the list of contenders that had been fed to him in a TV interview moments before.

“When the draw is done,” he eventually said, “the preparation will start for that. We’ll give it our all and I’m confident that we will be going to Russia.

“I said a while ago there: Bring them on. I believe in my team-mates; we believe in each other. There have been times when we have been questioned but the hunger is there, you see that in the performances.

“We had spoken about the night in Lille when Robbie [Brady] scored and it’s nights like that that you want to perform. We’ve done that again tonight. We stuck to the gameplan; we’ve executed it. We were very good for the 90 minutes and we were worth the win.”

Nobody was arguing and if there was a downside to any of it for anybody it was for Meyler himself. His very late booking for a foul committed after he chased a long ball out of defence and collided with the Welsh goalkeeper Wayne Hennessey means that having captained the side so successfully over the last few days, he will not even feature in the first of next month’s two games.

“Look, probably it was a rush of blood on my part,” he said with a shake of the head. “I sort of smelled the way it was going and felt that Jeff [Hendrick] was going to flick the ball that way and so I took off. It probably wasn’t the quickest of races I’d say but if I’d got there a second or two earlier I might have scored my first Ireland goal.

“I felt I won the ball but if you’d said to me beforehand ‘take a yellow card to captain your country in a World Cup qualifier to beat Wales in Wales,’ I’d have bitten your hand off so . . . sometimes there has to be a sacrifice.”

The sense of sacrifice was more collective here, though, with every Ireland player prepared, it seemed, to work til they dropped and put their bodies on the line.

“IT comes down to wanting to work for your team-mate; wanting to run for your pal,” the Hull City midfielder insisted. “Everybody did that to a tee, we got the victory and that’s we deserved it.

Asked if he was concerned during the opening stages that the team seemed to be struggling to get off the backfoot, he was adamant that he felt things were under control.

“We were organised. Look, games can turn in a second or two. Jeff nicks the ball off Williams, puts a great cross in, Harry dummies it and McClean sticks it in. It’s a split second but we said we knew we had to win a game. We needed to be organised, we needed to keep our shape and we were focused.

“They didn’t create much; one ball fell to Ramsey, a second ball and he’s had a shot, yeah, fair enough but the first 20 minutes we were organised and we were able to get into the game, our confidence grew and we were able to create stuff so I wouldn’t say we were on the back foot, no.

“After the first 20 minutes we started to string some passes together. We were getting down the sides and creating. We were getting corners and when you’ve got the likes of Shane Duffy, and Ciaran Clark and they can head the ball and Daryl Murphy, full of confidence after his goals the other night, you always have a chance.”