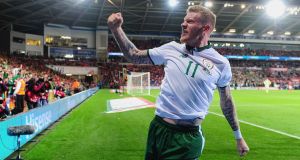 Monday night’s rousing win 1-0 against Wales has put Ireland two games away from a first World Cup appearance since 2002.

Martin O’Neill’s side secured second place in Group D - and with it one of eight playoff places - after threatening to throw away their strong start to the qualification campaign.

Ireland didn’t go about it the easy way - picking up just one point against Georgia and Serbia in the penultimate weekend of qualifying and leaving themselves a mountain to climb.

But it was one they were able to scale - holding their nerve against Moldova in Dublin and then summoning one last effort to tame the dragons in Cardiff on Monday night.

There is still work to be done, and a two-legged playoff against the likes of Portugal, Italy or Croatia might ultimately prove a bridge too far.

But they’ve given themselves every chance of making it to Russia next year. Here are the key moments from Ireland’s successful campaign.

Ireland’s opening 2-2 draw away to eventual group winners Serbia was a result which looked more and more impressive as Group D progressed - but its significance wasn’t lost on anybody at the time. It took Ireland just three minutes to open their qualification account, with Jeff Hendrick finishing from the edge after the home side failed to deal with an early corner. The tide turned ominously and emphatically during an eight minute spell in the second half, with Filip Kostic equalising in the 62nd minute and then earning a penalty, which Dusan Tadic converted. Ireland’s goose seemed cooked, but with 10 minutes to go Daryl Murphy met a Robbie Brady corner and headed home his maiden international goal. In the pouring rain of Belgrade, a defiant Ireland were up and running.

Having battled to a point in Belgrade, it was crucial Ireland didn’t hand it back when Georgia came to Dublin a month later. For long spells it looked like the laboured hosts were going to slip up, until captain Seamus Coleman provided a moment of magic in the 56th minute, getting round the back and bundling home a crucial winner. A win in Moldova followed a few days later, meaning Ireland ended the window joint-top with Serbia. So far, so good.

The moment when it felt like qualification was truly on. Ireland travelled to Vienna in a healthy position but with history weighing heavy – they hadn’t beaten Austria since 1963. But all runs come to an end eventually, and having been under the cosh for most of the first half Ireland made their biggest statement yet in the second. A swift break saw James McClean dash onto a Wes Hoolahan pass like a champion thoroughbred and fizz the ball into the far corner. Later that evening, Serbia drew 1-1 with Wales. Ireland were top heading into the new year.

Considering the state of play in Group D at the time, a draw at home to Wales and Gareth Bale was a perfectly adequate result for Ireland – but a serious injury to the talismanic Coleman meant it left an incredibly bitter taste. It was a scratchy, tempestuous game befitting of the stereotype, and it was marred in the 69th minute when Neil Taylor’s ugly lunge saw Coleman leaving the field on a stretcher, guzzling gas and air. The game finished goalless, and a bit of spark seemed to have gone from Ireland thereafter, who would now have to make it to Russia without their best player.

The candle starts to flicker in Tbilisi – September 2nd 2017

A draw at home to Austria in June meant Ireland and Serbia were locked at the top of Group D heading into the penultimate international window – with a showdown in Dublin to come. But having done much of the hard work, O’Neill’s men contrived to throw it away in Tbilisi. An insipid, laboured performance against the Georgians saw them held to a 1-1 draw – a result which at the time felt terminal. Serbia then came to the Aviva Stadium and eked out a 1-0 win – from a position of prominence Ireland now had a mountain to climb.

Ahead of Ireland’s trip to Cardiff, the permutations over who would and wouldn’t get a playoff place were myriad and headache inducing. However, Scotland’s draw in Ljubljana the day before cleared things up significantly. A win in Wales and Ireland were guaranteed a playoff - a win or a draw would be enough for the hosts. Ultimately, O’Neill’s men produced one final, famous hurrah when they needed it most - with James McClean’s second half goal silencing Cardiff and sealing second.

This Ireland team are already responsible for a number of the nation’s greatest sporting nights - and they added another to the list as they edged out Wales in Cardiff, securing a playoff spot in the process. Having frustrated the hosts, who saw plenty of the ball without making many chances, Ireland delivered the killer blow after 57 mintues. Dogged work from Hendrick saw him dispossess Ashley Williams and force his way down the right, where he delievered a good cross to the edge. Harry Arter dummied and left the ball for McClean, who thrashed the ball into the right corner. The 3,500 travelling fans went beserk, Ireland then dug in for another famous victory. The playoffs await.

1 Betting shops face uncertain future as they prepare for Monday reopening
2 Tianna Bartoletta: ‘After you’ve gotten your medal, you become black in America again’
3 Kameko shocks Pinatubo in 2,000 Guineas at Newmarket
4 Sideline Cut: Marcus Rashford proves himself a leading man off the pitch also
5 Ian O’Riordan: An education in race and running during college days in America
Real news has value SUBSCRIBE
Crossword Get access to over 6,000 interactive crosswords