Danger here! This Rock is on a bit of a roll 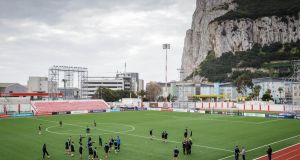 Gibraltar train at the Victoria Stadium ahead of their clash with Ireland. Photograph: Ryan Byrne/Inpho

By tradition when the British House of Commons elects a new Speaker the successful candidate is physically dragged to the Chair by other MPs to remind them that nobody in their right mind would voluntarily take the job. A similar ceremony should be held when the Republic of Ireland appoint a new manager, such is the level of scrutiny and criticism that invariably accompanies it.

Returning to the hot seat is Mick McCarthy, the first Irish manager to be told when he would lose his job before he even started it. Having ended 2018 by making unwanted history by being among the first international teams ever to suffer the indignity of relegation, Ireland enter 2019 seeking desperately to avoid making even more embarrassing history by becoming the first country to fail to qualify for a major tournament that they are co-hosting.

The good news for McCarthy is that tickets for his first match at the 2,300 capacity Victoria Stadium are like gold dust. Suspicious of the unprecedented demand for the match tickets from people with Irish addresses, the Gibraltar Football Association (GFA) suspended online ticket sales, instead selling them directly to local supporters from their official shop located in the ironically-named Irish Town. The GFA later regretted the fact that “in some cases, there were queuing times in excess of 3 hours, which is of course entirely unacceptable and not a scene we want repeated”, an apology that FAI chief executive John Delaney can only dream of having to issue in respect of ticket sales for the Aviva.

Despite the GFA being one of the oldest football associations in the world, dating back to 1895, it was only admitted by Uefa as its 54th and smallest full member in 2013 following a 20-year battle for recognition. Leading the opposition was Spain, which threatened to pull its teams out of international competition if Gibraltar was admitted. Spain has long claimed ownership of Gibraltar, which was ceded to the British following the Treaty of Utrecht in 1713. One legend holds that if the territory’s famous barbary macaque monkeys leave then Gibraltar will cease to be British. Keen to avoid this outcome, Winston Churchill created an effective backstop by topping up their dwindling numbers during the second World War. Spain also has concerns about its Catalan and Basque regions seeking similar recognition and so, to this day, refuses to either play or host matches involving Gibraltar.

Initially Gibraltar tested the cliché that there are no easy games in international football to its maximum, by losing all of its qualifying matches for both Euro 2016 and the 2018 World Cup and conceding 56 and 47 goals respectively. Another difficulty is finding the net, with their joint record scorers on two goals each, one less than Robbie Keane scored in the first 18 minutes when Gibraltar lost 7-0 on their only visit to Dublin in October 2014.

Yet over the last year the fortunes of Gibraltar have improved dramatically. Crucial to this is the newly established Nations League, unfairly dismissed by Jürgen Klopp as being “the most senseless competition in the world”. For the first time the continent’s weakest nations are playing competitive matches against countries of similar ability which they have a realistic chance of winning.

This was highlighted last October when Gibraltar enjoyed the greatest week in its history. Never having previously won a competitive international, they won two in four days. The first was a 1-0 victory away in Armenia when the hosts upset their visitors by mistakenly playing the national anthem of Liechtenstein rather than that of Gibraltar. At the start of Gibraltar’s next game three days later the Liechtenstein anthem was again played but this time without objection as they were the visitors to the Victoria Stadium. Gibraltar won 2-1, the first time that they had ever scored twice in the same game. Having also beaten Latvia in a friendly in March, this means that the Rock really was on a Roll in 2018, winning three matches in a year in which the Republic of Ireland only won one, making Gibraltar the form team going into this weekend’s match.

Equally important to Gibraltar’s development is the fact that they are finally getting to enjoy home advantage. Prior to the Nations League the lack of a suitable stadium forced Gibraltar to play “home” matches 400km away at Faro’s Estadio Algarve in Portugal, a stadium whose 30,000-capacity was so vast that it would still have had empty seats even if the entire population of Gibraltar travelled to attend. Gibraltar did successfully host the Subbuteo World Cup in 2018, taking full advantage of the much laxer criteria that apply for stadia when the players are two inches tall.

Ireland will play in the upgraded Victoria Stadium which has an artificial turf pitch and is overlooked by a giant limestone rock providing the most spectacular backdrop in European football. As it is the only ground in Gibraltar, the Victoria Stadium hosts all club matches rendering footballing concepts such as the away goals rule, simultaneous kick off times and the home club shop somewhat redundant.

Gibraltar’s squad is largely drawn from the Lincoln Red Imps, who are currently closing in on their 16th title in the last 17 years and whose greatest ever result was a 1-0 victory over Celtic in a Champions League qualifier in July 2016 which is still referred to as “The Shock of Gibraltar”. That victory was masterminded by Uruguayan Julio Ribas, who now manages the national team. Ribas is best known for his part in an on-field brawl when managing Penarol, after which he and nine players spent a week in prison amid scenes involving the mass imprisonment of footballers not witnessed since the movie Escape to Victory.

Gibraltar’s recent improvement has taken place in the absence of any star players. Indeed, the most high-profile Gibraltar native in football is probably former Chelsea first team doctor Eva Carnerio. Their most well-known former player is Danny Higginbotham of Manchester United, Southampton and Sunderland fame who enjoyed one of the most unusual international careers of all time.

Born in Manchester to a Spanish mother Higginbotham was eligible to play for two of the sports superpowers but as he modestly wrote in his autobiography Rise of the Underdog there “was more chance of me landing on the moon than being called up for England or Spain”. Uncapped at 34 and with no lunar landing on the horizon, Higginbotham replied to a random tweet revealing that his grandmother was from Gibraltar.

This led to an immediate call up from the then manager of Gibraltar Allen Bula who also happened to be Higginbotham’s uncle although the pair had not met for 15 years. Higginbotham made his debut in Gibraltar’s first ever international as a Uefa member, a credible 0-0 draw with Slovakia, in which the defender was named man of the match.

Gibraltar’s current brightest prospect is Louie Annesley, a six-foot-four centre half with Blackburn Rovers who at 18 already has three full caps. Annesley is still eligible to play in the Under-19 European Championships in which Gibraltar and the Republic of Ireland are in the same qualifying group with the finals to be held in Northern Ireland in July 2020.

Gibraltar has a proud footballing history and should not be underestimated by Ireland this weekend. Any team which was able to win the Island’s Cup in 2007, despite not being an island, is a team capable of causing an upset.