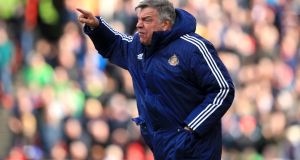 Sam Allardyce has yet to be announced as the new England manager. Photograph: Mike Egerton/PA

Sam Allardyce’s appointment as England’s manager is expected to be delayed until Friday to allow Sunderland and the Football Association time to finish haggling over compensation. Roy Hodgson’s successor is then likely to be presented to the media at some point next week.

With David Moyes set to be swiftly installed as Allardyce’s successor on Wearside, negotiations are not regarded as a major problem but reflect the Sunderland owner Ellis Short’s anger and frustration at the manner in which he perceives the FA has poached his manager.

Considering Allardyce had only a year outstanding on a club contract worth around £2m a year the deal appears straightforward. It has, though, been slowed slightly by Sunderland’s desire to gain a little more than £2m by way of recompense for the disruption caused to their transfer plans and pre-season preparations.

Short was particularly irritated by the near two-week hiatus which followed his manager’s interview for the England job and immediately plunged the club into a potentially harmful limbo.

It had appeared that Allardyce’s final act as Sunderland manager would be his departure after half-time from Wednesday night’s 3-0 friendly win at Hartlepool but, instead, the 61-year-old was back at the training ground putting Jermain Defoe and company through their paces on Thursday morning. Although barred from speaking to reporters until matters are concluded he slowed his car sufficiently to offer waiting television crews a thumbs-up on the way in.

A few hours’ drive down the A1, a meeting of the FA board at Wembley on Thursday morning rubber-stamped a decision made by Martin Glenn, the FA’s chief executive, Dan Ashworth, the technical director, and David Gill, the vice chairman, before moving on to other business expected to occupy them for the remainder of the day.

Allardyce - who has agreed a two-year contract worth around £3.5m per annum with an option to extend that deal for a further two years - informed his Sunderland players that he was the new England manager during the half-time interval at Hartlepool. With news of the appointment they had long anticipated having emerged as they travelled down the A19 to Victoria Park on the team bus it came as scant surprise.

Following the jubilation of May’s narrow escape from relegation Sunderland’s outgoing manager had become frustrated in recent weeks, particularly after Short informed him that this summer’s transfer budget would be around 50 per cent less than Allardyce had hope for.

Now Moyes - the former Everton, Manchester United and Real Sociedad manager whom Sunderland’s owner has twice courted in the past - will have to try to persuade Short to speculate to accumulate. Under the guidance of a new chief executive in Martin Bain, the Wearside club have still to make a signing this summer, although a deal for Aston Villa’s Micah Richards is believed to have been agreed in principle.